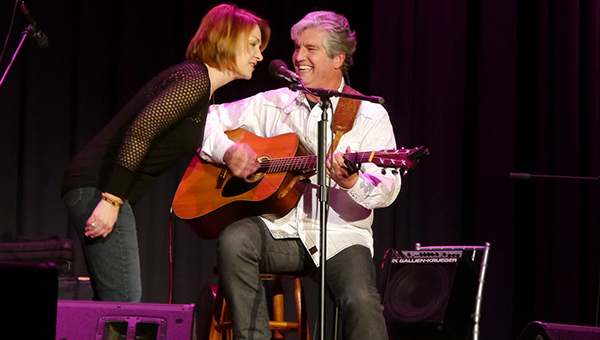 The final performance of the Greenville Area Arts Council’s 34th season brought a generous dose of musical mastery and a foot-stomping good time courtesy of the SteelDrivers.

It was bluegrass with a definite twist that band members call “funky gospel grass” and critics have hailed as “superior soul grass.”

A full house at the Ritz enthusiastically welcomed the Grammy-nominated quintet from Nashville, with Jerry Salley serving as the opening act. Salley, an award-winning country and bluegrass singer/songwriter, is a longtime friend of Greenvillians Al and Dale Brannon. Salley also co-penned some of the SteelDriver’s songs.

He got a big surprise when SteelDriver vocalist/fiddle player Tammy Rogers slipped on stage and joined Salley on a song made famous by country luminary Reba McIntyre.

“I’ve sung that one often enough on stage with Reba,” said Rogers, who has toured the country with McIntyre.

The benefits of their combined years of experience recording and performing with talents as diverse as the Rev. Al Green and the musician known as “father of bluegrass,” Bill Monroe, was amply displayed as they performed “bluegrass for people who don’t necessarily like bluegrass.”

Following their standing ovation, the band returned for “one more song” and then headed over to enjoy the after-show party with audience members in the lobby of First Realty.

The SteelDrivers’ latest album, “The Muscle Shoals Recording,” has been nominated for Bluegrass Album of the Year at the upcoming Grammy Awards.

“This may be a first for us,” said GAAC Executive Director Nancy Idland before the show. “To actually have Grammy nominees performing on our Ritz stage is beyond exciting.”