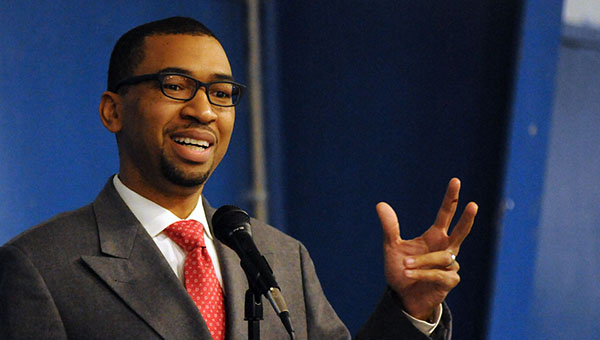 “(Today) we celebrate the birth, the life and the dream of Dr. Martin Luther King,” said George Cook, chairman of the Butler County Civic League. “We gather each year on the third Monday in January to reflect, recognize and remember the injustices that Dr. King fought. In the spirit of love, we celebrate the legacy of an extraordinary man, who did extraordinary things for common people.”

Georgiana Mayor Jerome Antone said he was one of those people who King’s life impacted in a significant way.

“When I was nine years old growing up in Montgomery, Alabama, in 1963, Dr. Martin Luther King gave his speech on Washington,” Antone said. “We didn’t have a television at the time, so all of us packed into the George Washington Carver auditorium to listen to the speech. That particular speech rang throughout our nation — ‘I Have a Dream.’ … I grew up in that dream, growing up in Montgomery, Alabama, on the west side. I was a young man, and I was struggling. My family was struggling. But Dr. Martin Luther King gave us a dream and told us to hold onto that dream. As long as you hold onto your dream, all things will come true.”

King’s message — a message of peace, love, justice, righteousness, accountability and humility— is one that still resonates, and is still very much needed today.

Montgomery County Probate Judge Steven Reed, who served as the keynote speaker for Monday’s breakfast, said King’s message — his dream — was more than just wishful thinking. It was a call to action.

Reed said that if King’s “I Have a Dream” speech is all one knows of King, then one fails to see the full picture.

“I think sometimes Dr. King is viewed as a passive observer and a wistful dreamer,” Reed said. “But that’s inaccurate. You see, when we only take the chorus of that great hit, it’s no different than a song, and you may miss what the song is really about.

“’I Have a Dream’ was not about Dr. King’s completed idea or wishful thinking. … It was a searing critique of the promises that had been made to African-Americans and not delivered on. It was his effort to put a mirror in the face of the United States government. Dr. King was saying, ‘Here’s where we are, what we look like. Here’s what I pray that you look like one day.’

Reed said that in doing so, King’s legacy will truly live on.

In December of 1965, King visited the Camellia City and preached at the church. Jim Peppler, a photographer with the Southern Courier, snapped a photo of King standing behind the church’s pulpit. Kevin Pearcey, director of the Greenville-Butler County Public Library, stumbled across the photo while preparing a Civil Rights exhibit that was displayed at the library during Black History Month last year.

The photo sheds light on the role Greenville played in the Civil Rights movement.

“Oftentimes, when discussing the Civil Rights movement, we talk about Selma, Birmingham, Montgomery — all important places — but it’s also important to realize that this was a very real struggle that happened in small towns like Greenville across the south,” Pearcey said.

McLendon said during Monday’s presentation that he was shocked to learn that King had visited the Camellia City.

“I got chill bumps,” McLendon said. “I just couldn’t believe that Dr. King had been in Greenville. I didn’t know it. I’m sorry to say I didn’t, but I didn’t know it. … I believe that every child in Greenville needs to know about him being in our town, and the march and what happened and how it happened.  … I think it’s a great thing for the City of Greenville that this great man came to our town, and I think we need to remember that. “

The photo has been displayed at schools across the county, the Butler County Courthouse, Greenville City Hall and the library.

The picture will eventually hang in the church with a plaque commemorating King’s visit.

Grammy-nominated band to perform at Ritz