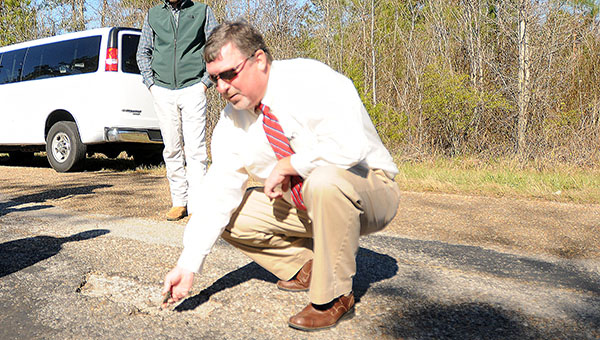 Butler County Engineer Dennis McCall examines a portion of County Road 17. Many of the county’s minor collectors are approaching “complete failure” and will likely one day have to be returned to unpaved roadways. (Advocate Staff/Andy Brown)

Butler County Engineer Dennis McCall stooped down and lifted a small chunk of the road from County Road 17.

The roadway, also known as Stinson Road, is badly battered by decades of traffic, including large trucks carrying timber, and insufficient maintenance due to a lack of funding.

It’s the story of many of the counties 544 miles of paved roads.

And while the Alabama Transportation Rehabilitation and Improvement Program (ATRIP) helped the county fund the replacement of a bridge and 87 miles of road improvements that would have taken years to save for, there are still many roads in the county that need help.

Many of the county’s roadways were built in the 1950s and 1960s as part of the Farm to Market Act — a program that aimed to move Alabama forward by creating a transportation system in rural counties that would allow for economic growth.

According to McCall, many of the county’s minor collectors, also known as Farm-to-Market roads, have never been resurfaced since their construction. Some are approaching complete failure and will likely one day be returned to unpaved roadways unless an adequate funding source can be found to make the necessary repairs.

Butler County relies on its portion of federal funds and gasoline tax revenues, distributed by the Alabama Department of Transportation, to maintain its road system. Butler County receives approximately $1.7 million a year from the gasoline tax and another $500,000 a year in Alabama Federal Aid Resurfacing funds.

According to McCall, the $1.7 million is used to cover the payroll for the county’s Road Department, and the remaining $500,000 is used to help maintain the roads. It would cost more than $90 million to resurface Butler County’s road system.

“We’re simply unable to maintain the road system with the current revenues received,” he said.

On Monday, McCall and Butler County Commissioners Joey Peavy and Darrell Sanders took Rep. Chris Sells on a tour several county roads in an effort to paint a picture of the county’s need for additional funding, and gain the lawmaker’s support of a proposed increase to the gasoline tax.

Rep. Mac McCutcheon, chairman of the Alabama Legislature’s Joint Transportation Committee, proposed a bill during the last session that would have raised the tax by 5 cents per gallon and then adjust the tax up or down another 2 cents each year, depending on consumer prices and other factors.

McCutcheon has said that he is working on another proposal to be considered during the session that begins Feb. 2. The new proposal would cap the amount of tax that can be added through indexing.

Sells said there are too many uncertainties with the automatic indexing, which could lead to large increases in gasoline prices.

“I can’t support any tax that I don’t know how much it will be,” Sells said.

While Sells acknowledges that the state must figure out a way to repair the Farm-to-Market roads, he isn’t convinced a fuel tax is the answer.

“There’s no question we need to find a way to fund these repairs, and maybe a fuel tax is one way we can do that, but I’m not sure what’s been proposed in the past is the answer, and unless there are some major changes to the bill, I don’t think it’s something I could support.”

Sells said he could possibly support a bill that capped the gasoline tax at 5 cents. A 5-cent increase would generate $500,000 a year for Butler County.

“If we did see extra revenue, that money would go toward minor collectors,” McCall said.

Sanders, who serves as chairman of the Butler County Commission, said increasing the gasoline tax is the only hope he sees for repairing the county’s crumbling roadways.

“We’ve got to find a way to fix our minor collectors,” Sanders said. “Those are the roads that most of our people live on and drive on. (The lack of funding) is a problem, but it’s not a problem unique to Butler County. It’s a problem for counties across the state, and we’ve got to do something to find some funding.”

According to the Association of County Commissions of Alabama (ACCA), most counties are facing this same issue.

“For years, we’ve had to piecemeal together funding packages to help counties keep their heads above water with basic road and bridge maintenance. In order to truly meet Alabama’s 21st century mobility needs, we will have to identify a sustainable revenue source for local infrastructure programs,” said Sonny Brasfield, ACCA executive director.

The need for better funding for repairs to aging roads, led McCall to join other county engineers, county commissioners, community leaders and residents in a coalition known as DRIVE Alabama. DRIVE stands for “Developing a Road and Infrastructure Vision for Everyone in Alabama.”

One of the main goals of DRIVE is to develop a sustainable funding mechanism that generates sufficient revenue so counties can properly maintain their roads and bridges.

“With our current financial resources almost exclusively going to maintenance activities, Butler County is situated like most Alabama counties,” said McCall. “The amount of money needed to improve and preserve the county’s road and bridge network is 265 percent higher than what is currently available to perform basic maintenance. We simply don’t have the resources to complete all the infrastructure work that needs to be done.”