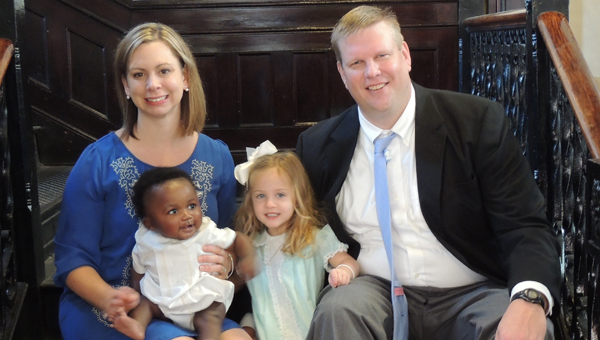 When Rebecca and Dave Bunt first envisioned growing their family, they never imagined they would do so through adoption. Now, the couple can’t imagine things happening any other way. (Courtesy Photo)

In 2006, Rebecca and Dave Bunt stood at the altar dreaming of their wonderful lives together.

Those dreams included attending dance recitals, playing catch in the yard, spirited games of hide-and-seek and sharing laughs with their future children.

Rebecca, a Greenville native and Fort Dale Academy graduate, and Dave wanted nothing more than to be parents.

After Dave, a Blackhawk helicopter pilot in the U.S. Army, returned from a tour in Afghanistan in 2009, the couple decided it was the right time to start their family.

A year passed and Rebecca was still not pregnant, so the couple elected to see a doctor for infertility treatments.

Rebecca underwent two surgeries for endometriosis, a disorder in which tissue that normally lines the uterus grows outside the uterus, and started taking Clomid, a medication used to stimulate ovulation.

Months passed and Rebecca was still not pregnant.

“This was a very difficult time for us both,” said Rebecca. “Infertility is an extremely hard road to travel, and we were both starting to lose faith. I remember becoming angry at God and questioning why this was happening to us. I could not understand why, when my heart’s deepest desire was to become a mother, God would not allow me to become pregnant. It was only when I finally let go of the burden, accepted the path God had put us on, and began to trust Him again that He started to answer our prayers in the most beautiful and amazing way. Little did we know then that one of our most difficult struggles in life would turn into the greatest blessing we could have ever imagined.”

After months of taking Clomid with no results, Rebecca and Dave were all set for their first round of in vitro fertilization (IVF).

“At this point in our journey, I was trusting God to show us His will, and to bless us with a child,” said Rebecca. “Even though we were well on our way to in vitro, I knew that something was not right. There is no other way to explain it other than I knew that God wanted us to go in a different direction.  He was leading us away from in vitro.”

Rebecca began to feel the call to adopt. At this point, Rebecca and Dave had not yet discussed adoption.

“Before I brought the subject up with Dave, I began to pray that God would open his heart to adoption if that was His will,” said Rebecca. “One night, while Dave and I were on our way to eat dinner, we were talking about IVF, and Dave asked me what I thought about adoption. I was floored! This was my answer to prayer. This was what God had planned for us all along and I was so excited to pursue adoption.  From this point on, our journey became much easier because we knew that no matter how long we had to wait, that we would eventually become parents. We also knew that since God had led us here, that He would not let us down. He indeed is faithful!”

With the decision made to pursue adoption, the Bunts jumped head first into the often time lengthy process of paperwork and home studies.

“Dave and I were so excited to begin the process with a national adoption agency that we had chosen to work with,” said Rebecca. “We singed up with American Adoptions in March of 2012 and began the paperwork process. People talk about how bad the paperwork for an adoption is, but honestly, we dove in head first and just got it done as quickly as we could. The most difficult part of the whole thing was writing a profile of the two of us that the agency would use to show prospective birthmothers.”

With the paperwork completed, the Bunts prepared for what they knew could be a long wait.

The wait turned out to be much shorter that either of them expected. Just a month after their profile became active, Rebecca got the call that made her desire to become a mother a reality.

“I will never forget that moment,” said Rebecca. “I was working at the surgery center in Oxford, Miss., and was in the operating room when they called me. Somehow I was able to keep calm and write all the information down without anyone else in the room knowing what was going on.

“We had been matched with a birthmother who was five months pregnant.  Apparently, she had received a stack of profiles in the mail, and while she was opening them, ours fell out of the stack and landed face up on the floor.  She said that she saw us and immediately knew that it was our baby. She said that she felt like God had called her to carry our child. I could not believe that it was all happening so fast, and that such an amazing, brave and selfless woman had chosen us to parent her child.

“Our wait for our birthmother to give birth was both immensely exciting and terrifying all at the same time. We eagerly anticipated the arrival of the baby, but we were also scared that she might change her mind and decide to parent herself.  The remaining five months were the some of the longest months of our lives.”

In October of 2012, Mary Ryan Bunt made her entrance into the world.

“October finally came, and we got the call that our birthmother was in labor,” said Rebecca. “We rushed as quickly as we could to Florida, where she had given birth to a beautiful baby girl. We will never forget the first time we laid eyes on Mary Ryan. She was the most beautiful baby we had ever seen. We spent the next two days loving on Mary Ryan and spending time with her birthmother. When the day came for her to sign her rights as a parent away, we were all torn with emotion.  Dave and I were praying that she wouldn’t change her mind, but at the same time, we saw her love for Mary Ryan and her grief over her decision. She loved her so much that she wanted to do the very best thing for her. I will never know how hard that decision was for her, but I will always know how brave and selfless she was that day. I was given a child, and my heart’s desire to become a mother was satisfied. However, for a woman whom I loved, who had carried and given birth to my child, it was possibly the worst day of her life. I will never forget that, and I will never let my child forget how much her first momma loved her.”

The Bunts were finally parents, but they still dreamed of growing their family. So in 2014, after moving to Macon, Ga., they once again decided to pursue adoption.

“We always knew that we wanted to have another child, we just wanted the time to be right, said Rebecca. “We decided that once we were settled in to our new home, we would start the adoption process again. We knew that we might have to wait months or years for a new baby, and were anxious to get started. As we began, we felt like God was calling us to be open to different races. We wanted to be open to whatever child God wanted to bless us with. We had such a wonderful experience with Mary Ryan’s adoption that we discovered that we had a real passion for adoption and the parallels it draws to our adoption as sons and daughters of God.  We found a wonderful local, Christian-based agency. We fell in love with this agency because of the ministry work that they do with their birthmothers. We decided to move forward with this agency and submitted our application in December of 2014.  We thought that we were going to have to wait until February, or possibly August to attend their mandatory training seminar.  However, much to our surprise, they opened up a special training session at the end of January for couples that were open to different races. God absolutely knew what he was doing because our son was born just over a month later!”

“We received an email from our agency about his birth and were in complete shock, as our paperwork was not even complete,” said Rebecca. “Will was born to another wonderful, brave birthmother who chose to place her child with us, and for that we are so grateful. We were told that we had a son on a Thursday, and that we were suppose to pick him up on the next Tuesday. We had less than a week to prepare for his arrival, but we were over the moon excited to meet him. We met him at the hospital and it was another moment that we will never forget. He was also the most beautiful baby we had ever seen and our hearts were so full. We are so blessed to be the parents of two beautiful and healthy children.”

For the Bunts, adoption proved to be God’s plan for growing their family.

This month is National Adoption Month

National Adoption Month is about spreading awareness. It is a month to encourage others to learn about adoption, to hold adoption related events, and to acknowledge the people in this country whose lives have been impacted by adoption. The mission of National Adoption Month is to celebrate the families who have grown through adoption, and to recognize the many children who are still waiting for forever families.

According to Lifeline Children’s Services, there are 153 million orphans worldwide.

There are roughly 400,000 children in the U.S. foster care system. Of that number, approximately 100,000 are waiting to be adopted.

Rebecca knows first hand the adoption journey can be difficult, but the blessing of seeing a family grow through the process is more than worth it.

“Adoption is an amazing experience,” she said. “It is not the easiest path to take, but it is such a huge blessing. (If you are considering adoption) pray about what God wants you to do and be willing to follow Him wherever He leads you.  Do your research on the different types of adoption and agencies, and reach out to people who have adopted. Talk to people who have been through the process, as they are often your best resource.”