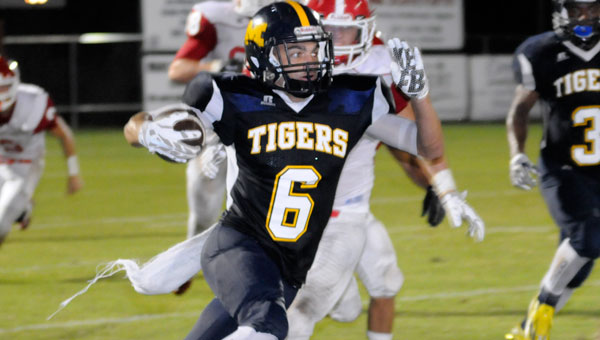 But the loss cost the Eagles much more than their first region game as running back Robert Scott suffered a game-ending injury that required emergency attention.

Though the team’s second-half momentum sputtered out with the loss of Scott in the third, the Tigers put the game away well before halftime thanks to an explosive start from running back Chris Shufford and receiver Condie Pugh.

The combination ground and air attack carved up the Pleasant Home defense early and often, propelling the Tigers to a commanding 24-0 lead with barely two minutes remaining in the first quarter.

Despite a number of false starts and illegal procedures, junior receiver Aaron Warthen bailed the Eagles offense out with a drive-sustaining third-down conversion and a 7-yard touchdown catch.

Senior running back Reid Adams caught the McKenzie defense unawares on a slow substitution as he bounced the ball outside and sprinted down the sideline for the Eagles’ second touchdown of the night just before the half.

But with McKenzie’s offense scoring at will, the second score barely dented the 31-point Tigers lead at the half.

Despite the sizeable lead, McKenzie head football coach Tony Norris had a few choice words for his defense at the half.

“I just felt like defensively we just weren’t playing and getting all 11 to the football and swarming,” Norris said.

“But we came back in the second half and did a better job of that with our alignments and assignments, and we played with much more physicality and much more effort on the defensive side of the ball.”

A reenergized McKenzie defensive front shut down drive after drive as the Eagles entered a scoring drought that wouldn’t be quenched until well into the fourth quarter.

McKenzie quarterback William Brown kept the Tigers’ momentum going after connecting with Pugh on a 35-yard strike for a 51-13 lead with 7:12 remaining in the third quarter.

But the most damaging blow to the Eagles’ morale came shortly afterward when Scott took several hits in the backfield that left him unresponsive for several minutes.

The deflated Pleasant Home defense coughed up another pair of touchdowns before launching a late-game response, but the damage was largely done.

Brown was 10 for 14 passing with 193 yards; Pugh was responsible for five of them, earning 114 yards in the process.

The Tigers face Kinston at home Friday while the Eagles host Notasulga.