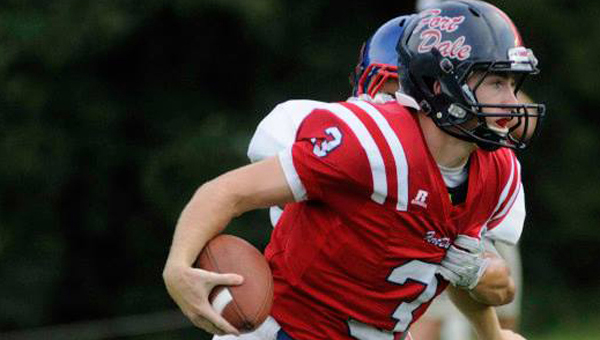 The Eagles (1-0) jumped out to an early 14-0 lead in the game’s first stanza thanks to a pair of touchdown runs by sophomore quarterback Luke Taylor. The first came from 51 yards out, followed by an 8-yard touchdown scamper.

A 2-yard touchdown run by junior quarterback Tanner Cartwright with 34 seconds in the third quarter pushed the Eagles’ lead to 35-0.

Senior kicker Jake Gillem was a perfect 5-for-5 on extra point attempts.

The Lions finally cracked the scoreboard with 4:02 to play in the game to cap the scoring.

Hartley, who finished the game with a team-best five catches for 169 yards, said overall the team played well.

“We had a lot more liveliness and excitement tonight,” Hartley said. “We’re preparing for a tough region game against Autauga next week, but we can beat them working together as a team like we did tonight.”

Zach Winters, William Sherling and Maurlan Dickerson each recorded an interception in the win.

The Eagles will be back in action next Friday when they travel to face Autauga. Kickoff is set for 7 p.m.