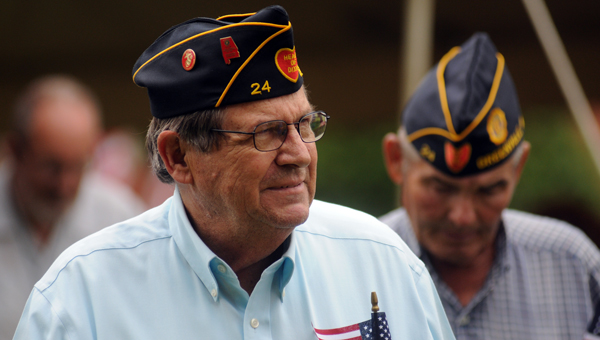 Jerry Myers was among the veterans that took part in the Walk of Honor during Monday’s Memorial Day Celebration in Greenville’s Confederate Park. (Advocate Staff/Andy Brown)

A large crowd gathered at Greenville’s Confederate Park on Monday to honor fallen military service members and celebrate those still living with a Memorial Day service.

The Memorial Day service was hosted by the Greenville Lions Club.

“Our attendance today will be a testimony to future generations about the importance and the true meaning of Memorial Day,” said Hubert Little, chairman of the Lions Club’s Memorial Day Celebration. “Through the sacrifice of our veterans, we are able to enjoy many freedoms in the United States, such as the freedom of religion, the freedom of the press, freedom of speech and the freedom to assemble here like we have today.

As part of Monday’s service, Jim McGowin played “Taps” on the bugle in honor of America’s fallen military heroes and Boy Scout Troop 520 placed flags in the park representing each branch of service.

Bailey shared about the Confederate and Union sailors who took part in the Battle of Mobile Bay, and those who lost their lives when the USS Tecumseh sank after hitting a mine in the Mobile Bay.

“Their true legacy for all of us should be that they died fighting for freedom,” Bailey said. “We should always remember their sacrifices as we should for all who have died defending our nation.”

The traditional Veterans’ Walk of Honor closed out the program, with veterans from all wars and conflicts since WW II represented, earning the applause of onlookers as they made their way down the sidewalk lined with flags.

A number of local businesses, including Hwashin America, announced expansions in 2014. Statewide more than 18,000 new jobs were added... read more