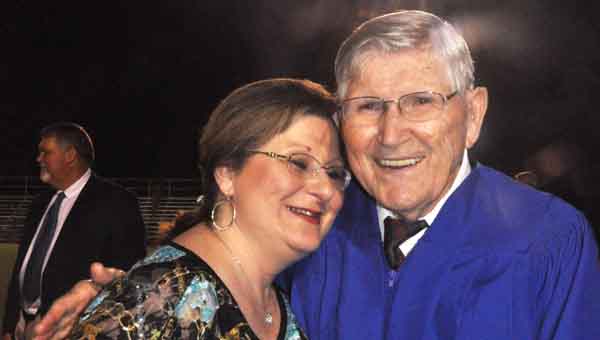 As family, friends, and loved ones gather to celebrate the high school graduation of so many excited young people, I sat in the stands at Highland Home School Tuesday night with pure joy as I watched my precious great-uncle J.D. Sexton finally receive his high school diploma.

You see, Uncle J, along with many other young men still in school at HHS in the early 1940s, was called to enlist in the Army and join the ranks of so many of our other young sons who were sent overseas to Germany to fight for freedoms, and, as he has told me, to see “things no person should ever have to see…..” during World War II.

Now, just two days shy of his 93rd birthday, Uncle J donned his HHS cap and gown and walked—a little slower than his fellow classmates, but still…..—across the stage to finally receive his high school diploma from his alma mater that he was called away from over 70 years ago.

Uncle J was close friends with the Faulk brothers, including Clarence Faulk, the older brother of Mr. C.J. Faulk, who was killed in action overseas.

I truly believe that if you looked really closely Tuesday night as Uncle J walked to receive his diploma, he was surrounded by several other young men, dressed in Army fatigues with worn silver dog tags hanging around their necks instead of a cap and gown……and one of them was probably named Clarence.

Carpenter pegged for Hall of Fame