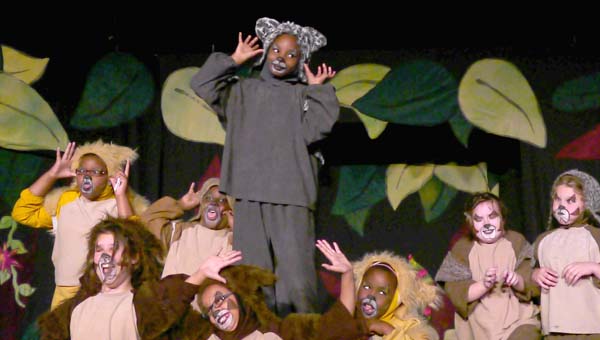 Akela and the Wolf Pack (A’Keria Watkins, Aaron Bedgood, O’Nieva Boggan, Isabella Carswell, MaKenna Davis, Jamilah Luster, Charley Salter, Madison Thornton) have fun making silly faces during their photo op. The students were part of the cast that performed “The Jungle Book” alongside members of the Missoula Children’s Theatre. The show was held Saturday at the Ritz Theatre. (Photo by Angie Long)

The budding actors earned lots of laughter and applause from an appreciative audience during the hour-long adaptation of Rudyard Kipling’s classic children’s story.

A co-production with the legendary Missoula Children’s Theatre (MCT), the

play proved to be a truly immersive experience for the student performers.

After auditioning on Monday, the cast members spent four-and-a-half hours each day after school memorizing lines and practicing songs and dances, culminating with a dress rehearsal Saturday morning before their performance Saturday afternoon.

Vivian Gates won the lead role of Mowgli, the orphaned boy taken in by a wolf pack, with JaNiya McCall as her best friend, the panther Bagheera.

Mowgli’s friend Baloo, the storytelling bear, was played by MCT’s tour actor/director Kevin Moxley, with the MCT’s Olivia Wardwell serving as director of the production. MCT has teams of actors/directors who travel to all 50 states and 16 foreign countries each year, bringing the scenery, props, and costumes with them.

“It has been an amazing week,” said Shera Stinson, GES library media specialist and the liaison between MCT and the school. “The children worked so hard and did a wonderful job. I saw kids really blossoming on that stage this week. We are so proud of all of them!”

The production was made possible at GES through a grant from the Alabama Arts Education Initiative.