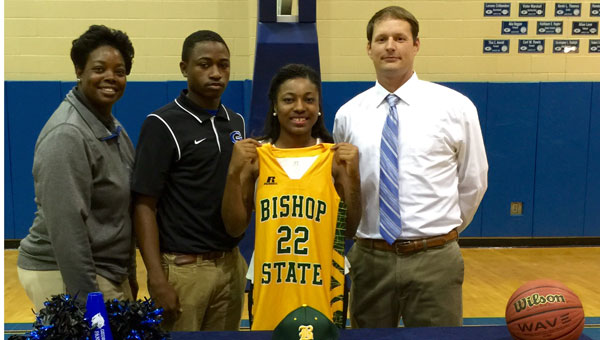 The second Georgiana basketball standout in as many months signed a letter of intent to play basketball at the next level Tuesday afternoon in Georgiana’s R.L. Austin gym.

Lady Panther Tyanna Perkins will be taking her talents to Bishop State Community College in Mobile.

She also recorded a season-high 41 points and snagged two tournament Most Valuable Player awards along the way in the Georgiana Thanksgiving Clash and the Class 1A Area 3 Tournament.

Georgiana head basketball coach Kirk Norris said that though he is sad to see her leave the halls of Georgiana School, he’s also happy to see her experience the next phase of her basketball career.

“Tyanna has played a vital role in the success of our team,” Norris said.

“She has great passion for the game of basketball and it’s always fun to coach players who want to be successful.”

The signing makes Perkins the first female and the ninth student athlete overall to sign on to a collegiate team in the past eight years at Georgiana School.

Norris said that he hopes Perkins’ success—as well as that of Jeremy Sims, who signed to play for Enterprise State Community College in April—can become a positive snowball effect for athletes at Georgiana School.

“It’s great for our basketball and overall athletic program when you have kids move on to the next level,” Norris continued.

“It says a lot about the program and the direction it has taken and where it is headed.  Furthermore, it’s great for our young players to see that they put in the time or overcame circumstance to get where they are today.”

Though the past year has taught Norris much about Perkins’ skills on the hardwood, he looks forward to seeing her improve even further at the next level of play.

“Tyanna is a great scorer and offensive player and she improved defensively this year, but I think that’s one thing she will need to improve even more at the next level,” Norris said.

“Her ball handling is also a strength and allows her some flexibility between playing both guard positions.”

The hardwood floors of McKenzie’s gym will be home to more than one sport come this fall. McKenzie assistant principal... read more