Oh, What a Night! 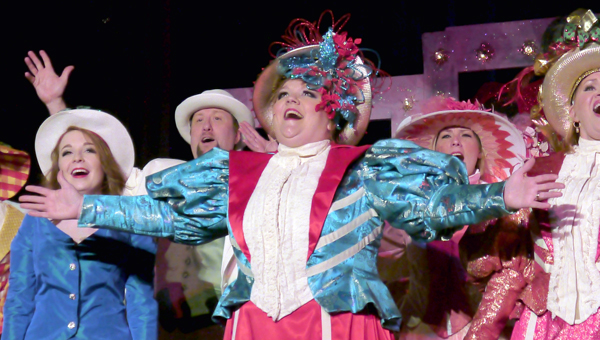 Christina Rodgers, Kevin Pearcey, Sandy Rodgers and Vicki Russell take center stage during the jubilant finale of “Before the Parade Passes By” from the musical “Hello, Dolly” during Thursday night’s performance of the Ritz Players’ “It’s Broadway, Baby!” (Photo by Angie Long)

“It’s Broadway, Baby” is a return to the roots of a production that has brought everything from country tunes and pop hits to old standards to the historic Ritz Theatre stage.

“I think it’s one of the best shows they’ve ever done,” said Vivian McGowin. “And those little girls? They could easily have been in an actual Broadway production!”

Some of the Ritz Players came together on Friday morning to perform for area students, an audience Ritz stage veteran Tom Payne always looks forward to, he says.

“Those performances for the schoolchildren are something I really enjoy. It’s giving some of these kids a chance to see a stage production like this for the first time,” Payne said. “It can instill a love and appreciation for this kind of music. This is where it can all begin for them.”

“Sweet Charity,” “Matilda: The Musical,” “Rock of Ages,” “Jersey Boys,” “Fiddler on the Roof,” “A Chorus Line” and “Les Miserable,” bringing an engaging mix of humor, sass and pathos to the hometown audience.

Ticket sales and sponsorships for POTR bring in funds to help the GAAC pay the artistic fees of professional performers each year.

“These are the same talents you would have to travel a distance and pay significantly more to see, performing right here on our hometown stage,” said Nancy Idland, executive director of the GAAC. “The arts are alive and well in the Camellia City.”

The final performance of “It’s Broadway, Baby” is tonight at 7:30 p.m.