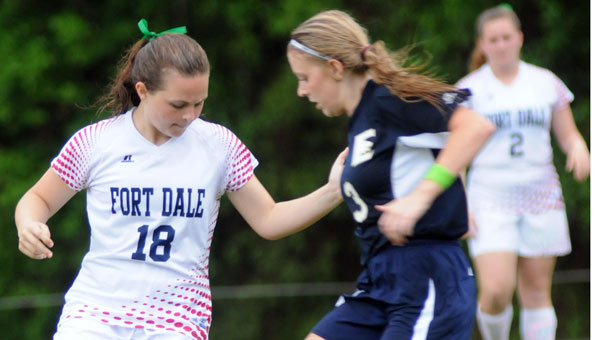 A stingy Fort Dale defense paved the way for a convincing 5-0 win over their first-round opponent, East Memorial Christian Academy.

The Fort Dale Academy Lady Eagles soccer team is headed to the semifinal round for the third straight year after a convincing 5-0 victory over East Memorial Christian Academy.

The Lady Eagles shut out the Wildcats completely with an unyielding defensive performance, while Jessica Little and Lauren Gibson put the pressure on fast with two goals apiece, as well as a fifth from Anjoy Castleberry.

FDA head soccer coach Josh Wildermuth said that the big round-one win was important to the team’s momentum, but not important enough to dwell on.

“It was great to make it back to the state semifinals for the third year, but we had to quickly get focused on the next game,” Wildermuth said.

The Lady Eagles venture into unknown territory with their semifinal opponent, Lee Scott Academy, but Wildermuth said that one thing is very clear about his team’s next challenge.

“They are a very good team; their only two losses were against the defending state champ, and we haven’t seen them yet, but our girls are prepared,” Wildermuth added.

“They put in the work, and we will go try to do our best.”

Two skilled players in particular stand out on the impressive Lee Scott roster, and Wildermuth said the key to victory would lie in limiting their influence on the game.

“And offensively, we need to use our speed to our advantage,” Wildermuth said.