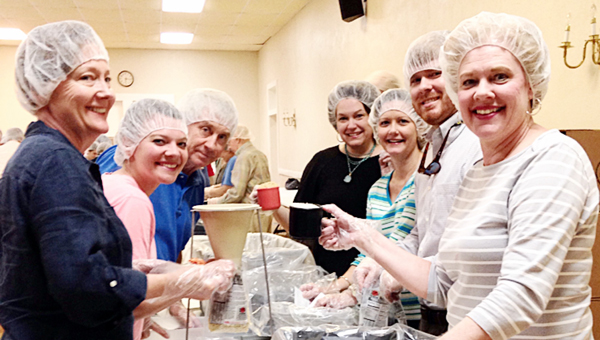 It takes nearly an hour to cook a Stouffer’s frozen lasagna.

In that time, volunteers at First United Methodist Church packaged 10,800 meals at a packing event for Stop Hunger Now, which was held at the church on Wednesday night. Eighty-six volunteers took part in the event.

“I always say, that one thing we know how to do well in south Alabama is feed people,” FUMC pastor David Saliba said.

Since its founding in 1998, Stop Hunger Now has provided more than 180 million meals in 65 countries. This year, the organization, which is committed to ending world hunger, expected to package 45 million meals and ship more than $9 million in donated aid, mainly vitamins and medical supplies.

The organization was founded by Ray Buchanan, an ordained United Methodist minister with the vision of ending hunger in his lifetime.

“Because of (the connection to the United Methodist Church), ever since it’s beginning a lot of United Methodist Churches have been involved,” Saliba said. “On a whole, we only like to partner with international ministries when we know how our resources will be delivered and managed. We only participate in feeding ministries when we know that partnerships are created to holistically address the needs of the people the ministry is serving.  Stop Hunger Now delivers food to places where ministries are firmly established and physical, emotional, and spiritual needs are met in a way that truly empowers a people in need to live a better life.”

Wednesday night marked the second packing event held at FUMC. The first was in September of 2014 when 78 volunteers packed 10,152 meals. Volunteers set up and take down packaging stations and equipment, fill bins with raw ingredients, scoop ingredients into meal bags, weigh and seal the bags, box and stack them on pallets, and load the pallets and equipment onto a truck.

“Last September our meals went to Haiti Outreach Ministries (HOM), which is a Christian mission that focuses on extremely impoverished areas in and near the capital of Port au Prince, currently serving the communities of Blanchard (Terre Noire), Cite Soleil, Ibo Beach and Repatriote,” Saliba said. “All U.S. staff are volunteers. The ministry fully funds and supports four schools with over 1,300 students from Pre-K – 6th grade; 140 students in high schools, and 80 students in colleges. They work holistically in impoverished communities to provide for basic needs, education, medical care and spiritual guidance. HOM also operates a medical clinic and a vocational program. Their programs have had a tremendous effect on the children in their care with teachers reporting that they have gained weight, are overall healthier and more attentive after beginning to eat Stop Hunger Now meals.”

Saliba said that the church hopes to hold two packing events each year, but to do so, the church must raise approximately $3,400 to cover the cost of 10,000 meals.

Saliba invited other churches and individuals to join in the effort.

“All of our programs and ministries at First United Methodist Church are open to all people,” he said. “Part of our motto is ‘open doors,’ so we would love to have anyone join us, and would thank God for others to take part in this important ministry. (Wednesday night) several of the volunteers were members of other congregations.”

Georgia teen killed in crash on I65

A two-vehicle crash Wednesday on Interstate 65 claimed the life of a Rex, Ga., teen and injured three others. (Photo... read more