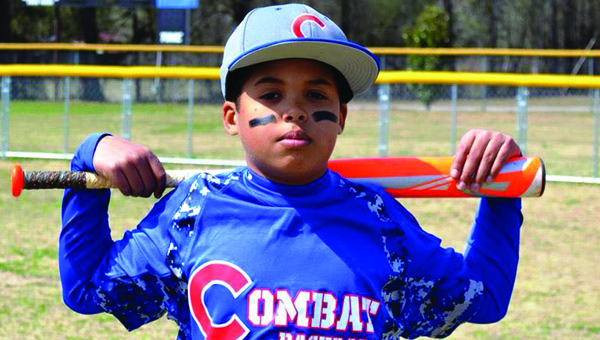 A group of young sluggers will be hitting the road this spring as members of Greenville’s first ever 11-and-under travel ball team.

The team, called the Greenville Combats, is composed of talent from several communities within Butler County as well as Crenshaw County, and coach Justin Kimbro said the team has one single, solitary goal.

“It’s basically one team put together for one purpose, and that’s to put out the best product we possibly can to represent this town.”

This weekend marks the team’s debut on the diamond, but the conversation about a travel ball team began at the conclusion of 2014’s all-star season with a number of coaches discussing how to go about cultivating the area’s talent pool into a formidable force.

Kimbro’s own sons played in travel leagues in Montgomery, which afforded him an opportunity to research what travel ball entailed.

“I was able to see all of the things we would need to do to form Greenville’s own travel ball team,” Kimbro said.

“I saw the camaraderie that came with travel ball, and I saw all of the parents getting together and working as one, and I said why can we not do the same thing in Greenville?  Why are we letting our talent that we have go to Montgomery to form other teams?”

Kimbro added that if it weren’t for excellent sponsorship from the community, as well as passionate and cooperative parents, the team wouldn’t have gotten off the ground in the first place.

But in order to get some parents onboard, he needed to convince them that there actually wasn’t much travel in travel ball after all.

“A lot of them were unsure because the horror stories of travel ball were that you had to go to Florida and Georgia and things like that in order to compete in these types of tournaments,” Kimbro said.

Thanks to the region-based scheduling of the United States Specialty Sports Association (USSSA), Greenville is situated nicely in the middle of a plethora of options—the Combats can travel to Dothan, Montgomery, Millbrook, Auburn, Enterprise and more for games.

With the logistics out of the way, Kimbro set his eyes on picking players for his team.  Fortunately, that was the easiest part.

“I put the 12 best kids I possibly could that not only had good talent, but good attitudes,” Kimbro said.

“With church and faith being focal parts of our team, I wanted the parents to know that there were going to be bible studies on Sunday. This team isn’t just dependent on baseball.  This team is dependent on having good character.”

To that end, Kimbro gives each of his players weekly assignments that they must complete before hitting the field.

Last week, the assignment was to open doors for at least 15 women. If the calls Kimbro received from thankful parents were any indication, they all passed with flying colors.

“If they didn’t, they have to give me a lap or two just to show that in order to be a Combat, it’s going to take a little bit of sacrifice,” Kimbro said.  “It’s going to take being good stewards of this community.  Because kids are going to look up to them one day, and why not start them out young?”

Though the travel team is preparing its young players for adulthood, it’s also bracing them for junior varsity and varsity high school baseball.

The landscape of high school baseball has changed, with the advent of travel ball, and players with experience against top-tier opponents have a sizeable advantage against their lesser-experienced counterparts.

“When you play top-notch talent each weekend, it’s going to prepare them in the long run,” Kimbro said.

The Combats will face their first opponent today in Enterprise against Strikers Baseball of Geneva County and the Enterprise Wildcats.

Ingram reflects on 30 years as chief