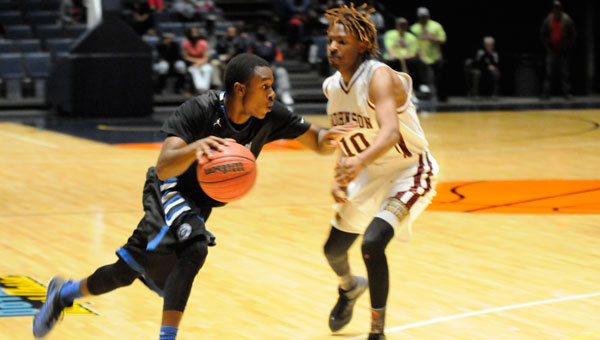 Jacquez Payton led a valiant fourth-quarter push for the Panthers and managed to take a nine-point lead, but Georgiana was unable to hold on for the win.

DOTHAN–The Georgiana Panthers found themselves in rather unfamiliar territory Tuesday against the A.L. Johnson Eagles—trailing, and for a majority of the game, at that.

Despite a valiant fourth-quarter comeback—one that resulted in a nine-point lead after a miraculous 17-4 run—Eagles superstar Shermon Kennedy answered the challenged and propelled A.L. Johnson to a 72-68 victory over the Panthers.

Georgiana struggled for much of the first half at the rim, with several high-percentage attempts and wayward passes missing their mark.

But a different Panthers team excited the locker rooms in the second half—one intent on closing the gap and recovering their patented up-tempo pace.

Jeremy Sims opened the fourth with a strong move inside for a basket and a trip to the line, and Jacquez Payton followed up with an off-angled shot that fell through despite a hard foul at the rim.

Though Payton missed the free throw, a tip from Sims gave the Panthers the lead with 5:43 remaining and sent the Georgiana crowd into a fervor.

With energy surging through the Panthers’ defense, the Eagles’ offense imploded in a series of turnovers that Sims and Payton capitalized on to extend the lead to nine.

And then, just as quickly as it began, the Panthers’ fire fizzled out as the Eagles matched the 17-4 run with a  14-1 run of their own.

Kennedy sank one of several 3-pointers that cut the lead to just three with 2:20 remaining, and a putback on a missed free throw gave the Eagles the lead once and for all with less than a minute left.

“We didn’t play defense as well as we have most of the year,” said Georgiana head basketball coach Kirk Norris.

“You have to credit [A.L. Johnson.] They played well.  They did a good job with offensive rebounds and second-chance points and [Kennedy] stepped up and played a great game.”

Payton finished with 20 points for the Panthers, while Richard Boggan added 16 points and 10 rebounds.

Jeremy Sims contributed 15 points and eight rebounds of his own.

Willie Warren was one of the biggest contributors from the Greenville Tigers’ bench, but his presence inside wasn’t enough to... read more