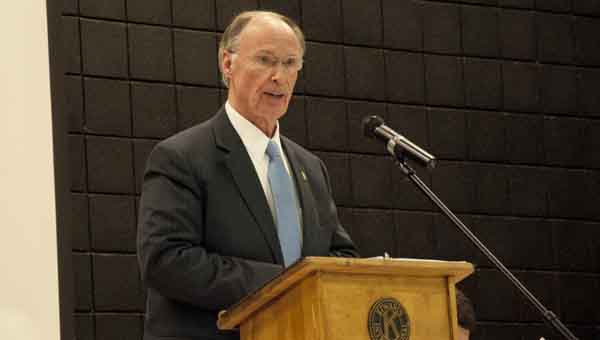 Gov. Robert Bentley delivered news to Crenshaw County officials that he said was hard for any Republican to deliver. The state would have to raise taxes to balance its budget.

“For a Republican governor to stand before you and say he’s going to raise taxes, that’s like eating a green persimmon,” he told a crowd gathered at the Luverne United Methodist Church’s Dei Center Tuesday afternoon. “Folks, we’re at halftime and we have to make adjustments.”

Bentley spoke at a luncheon held by the Luverne Kiwanis Club where officials from the county and municipalities were in attendance.

He said he would roll out a number of adjustments that included fairly taxing businesses that were currently using loopholes and seeking the least painless ways to make up the state’s deficit.

“We’re trying to make this as fair as we possibly can,” he said.