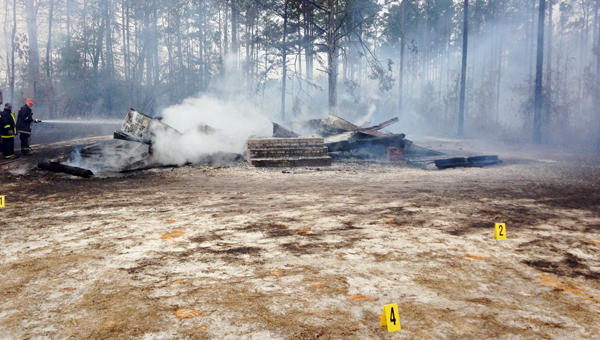 Butler County Sheriff Kenny Harden said there’s no power running to the church, and there have been a lot of incidents down there with kids.

“We do suspect foul play,” Harden said. “There’s no power to the church. We haven’t had any lightning or anything.”

Harden said the fire was spotted Monday, and the church was deemed a complete loss.

There was no damage to the cemetery surrounding the former structure, but an outhouse behind it burned up, too, Harden said.

An ATF (Bureau of Alcohol, Tobacco, Firearms and Explosives) Certified Fire Investigator (CFI) responded to the scene to work with the Alabama State Fire Marshal’s Office (ASFM) in order to determine the origin and cause of the fire. The Butler County Sheriff’s Department along with ATF and the ASFM will collaboratively pool their resources to determine if this fire was intentionally set or accidental in nature. ATF’s “Frontline” priority includes investigating all fires occurring at Houses of Worship (churches).

Also at the scene was Central Volunteer Fire Department with two fire trucks. Firefighters were at the scene for a few hours.

There hasn’t been an active congregation in the white-washed, 19th-century church in decades, but descendants of those buried in the church cemetery still work to keep the grounds in good shape.

This country church has gained quite the reputation over the years, but for reasons that may be unexpected. The small wooden church, located in Oakey Streak, has developed a reputation as a paranormal magnet.

For years now, stories of banshees, hellhounds, ghosts, ghost riders and even a haunted outhouse at the church have circulated throughout the county, state and even the nation.

One of the most common legends shared about the church is that of a Gaelic banshee, whose shrieking, sobbing and whimpering can supposedly be heard from the wooden walls of the church, and signaling that someone inside the church would soon die.

The second is a small girl. She appears and then skips down the road before disappearing again.

Another story associated with the church involves a black 1964 Ford pickup truck and a ghost rider.

The story goes that if a visitor loiters at the church for too long on the night of a full moon, the truck will appear and chase the visitors. If the truck catches up with the visitors, their vehicle will crash, killing everyone in the vehicle.

The final tale linked to Consolation Church is that of the outhouse that sits just a few yards behind the church.

Legend has it that if someone enters the outhouse, the door will shut and lock behind them, holding them prisoner until someone from outside opens the door.

In Oct. 2012, reporters with the Greenville Advocate ventured out to Consolation Church, with the permission of the owners of the property, to explore the stories surrounding the church.

The tales associated with the church appeared to be nothing more than urban legends passed down from generation to generation to entertain the listener.

However, the stories have proven costly for the church, which had suffered more than its share of vandalism as a result of those looking to spend a spooky night on the property.

The doors to the church had been removed. The windows had shattered glass clinging to their frames.  The pews had been removed from the building and burned, and the wooden floor of the church was stained with a pentagram reportedly painted there by a group of teenagers.