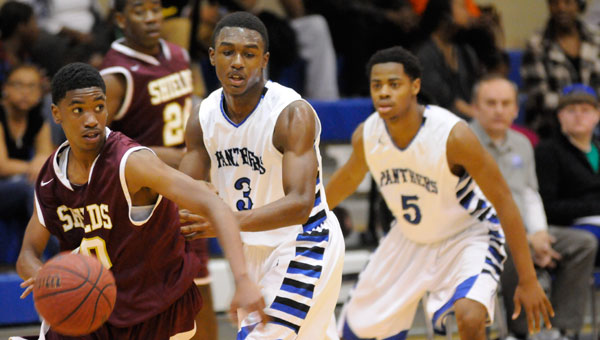 Georgiana’s full-court press, illustrated by Jacquez Payton (left) and Demarcus Rich (right), proved problematic for J.F. Shields, and the swarming defense took its toll as the game went on.

Georgiana proved the more prominent Panthers on the prowl Saturday in defeating J.F. Shields 89-66 in the championship round of the Class 1A Region 3 tournament.

It didn’t start that way, however, as J.F. Shields gave Georgiana everything they could ask for and more in the first quarter.

Both teams relied on full-court presses from the outset, hoping to force the opposing offense into committing turnovers and creating fast-break points.

Georgiana had a bit more success in getting to the line, however, as Sims and fellow inside man Richard Boggan made several trips to the charity strike.

Shields began to succumb to Georgiana’s press in the last moments of the second, and a buzzer-beating putback from Demarcus Rich gave Georgiana a seven-point lead headed into the second.

Holloman wouldn’t be denied, however, challenging Boggan and Sims inside for high-percentage shots.

Shields proved an outside threat with two back-to-back three pointers that tied the game moments later.

But a huge block from Sims provided a reminder to careless wanderers in the paint, and Jacquez Payton’s no-look dish to Boggan regained a healthy Georgiana lead.

Boggan and Sims continued to dominate the inside, drawing fouls in the process and extending the lead to nine at the half.

Shields’ foul trouble continued in the third quarter with five fouls committed in just the first three minutes of play.

An early nail in the coffin came from Travales Smith with a pinpoint-accurate three for a 14-point lead, Georgiana’s largest of the night thus far.

Meanwhile, the Panthers’ bench meant Georgiana’s offense operated like a well-oiled machine, not losing steam even as second stringers JaMichael Stallworth and Clarence Curry subbed in.

Thanks to a strong bench, Georgiana ramped up the score throughout the fourth quarter, putting the game well out of reach for the opposing Panthers.

Payton and Boggan earned all-tournament honors, while Tarien Crittenden took the Most Valuable Player award for the weekend.