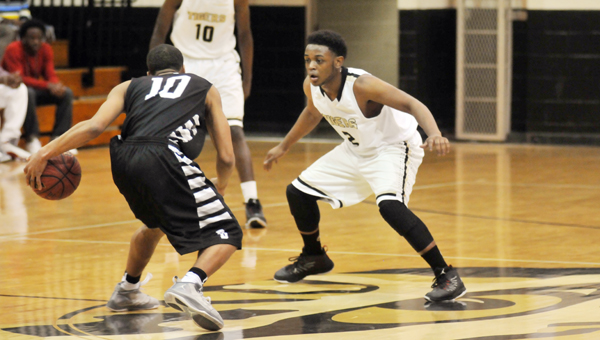 “Mirror, mirror on the wall, who is the fairest of them all?”

Greenville took that nursery rhyme to heart in the first half against Brewbaker Tech as the Tigers jumped ahead early and rolled to a 83-65 victory over the Rams in the Class 5A, Area 4 championship tonight.

GHS shot out to a 10-0 run from the opening tip, seizing control with its half-court press.

A putback by Myles Haynes, a steal and a layup from Raheem Moore, and back-to-back 3-pointers from Javarrius Cheatham and Zaccheus Smith spurred the nice start for the Tigers.

GHS head basketball coach Kelvin Lett said they knew that Brewbaker Tech was going to come into the Tigers’ gym with a lot of emotion after a 69-61 win over Lanier.

“We tried to match their energy early,” Lett said. “I think we did a pretty good job of it.”

With this victory, the Tigers advance to play in the Class 5A South Sub-Regional, where they’ll host Jackson on Tuesday night at 7. The Rams travel to play Vigor.

Tevin Burns got a quick four points and Willie Warren drained a pair of free throws to give GHS a 16-3 lead in the first period.

Brewbaker Tech’s Austin Rogers drained a trey to cut the lead to 18-6.

One of the highlights for the Rams came a little later in the opening period. Eron Blue jumped up, grabbed a rebound over the back of a GHS guard and scored the put back to make it 24-15.

The Tigers led 26-16 going into the second period.

BT cut it to nine when Jarett Hicks drained a couple of free throws, but the Tigers widened the gap back to double figures after a Johnathon Powell put back of an offensive rebound.

Warren got a bucket on a drive to the paint and Haynes scored off another put back after a Rams offensive foul call on the other end for a 34-21 advantage.

Cheatham grabbed a big rebound and found the net for a 36-23 lead.

Lett said every game, the Tigers try to outrebound their opponent.

“We pride ourselves in playing great defensive rebounding,” he said. “That’s one of our main goals every night — is to win the rebounding battle.”

The rest of the second period was dictated by foul calls. In the last 4:16 of the first half, the Tigers went 8-for-9 from the charity strip.

Brewbaker came out firing on all cylinders in the second half, but the Tigers kept a wide gap, despite a lot of fouls being called late in the third period.

Smith, with a shooting motion as smooth as silk, went on to score 11 of Greenville’s 20 points in the fourth period.

Lett said his players know when to let Smith go to work.

“He’s a senior and one of our captains,” the coach said. “He just does what we expect him to do. Everyone knows that he’s a great shooter, and so our team looks for him when he’s open, especially when he gets hot; so we try to feed the hot hand.”

Smith led all scorers with 19 points; Warren and Cheatham had 15 points each; and Haynes chipped in 10 points.

Demarcus Rich was one of several Panthers who proved disruptive to the Tigers’ offense, getting between passes and creating fast... read more