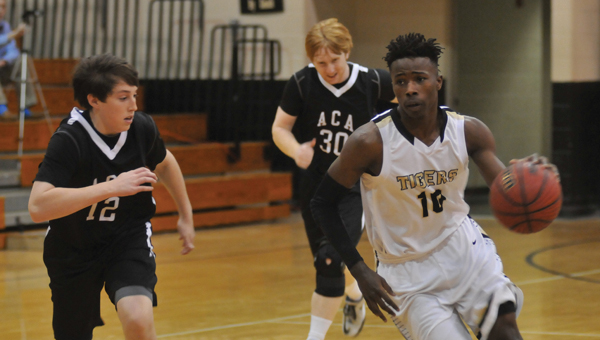 Greenville’s Raheem Moore drives the court during the Tigers’ 83-30 win over Alabama Christian in the semifinals of the Class 5A, Area 4 tournament. | ADVOCATE STAFF / ANDREW GARNER

Greenville’s full-court press and excellent shooting paved the way to the Tigers beating Alabama Christian Academy 83-30 earlier tonight in the semifinals of the Class 5A, Area 4 tournament.

The Tigers advance to the tournament championship, where they’ll face the winner of Brewbaker Tech and Lanier at 6 p.m. Saturday.

GHS went ahead 9-0 quickly after the opening tip, thanks to a Raheem Moore layup, and Zaccheus Smith’s deuce and a 3-pointer with roughly six minutes left in the first.

Myles Haynes later got an easy jumper to make it 11-2.

ACA did the best it could, but couldn’t handle the press without one of its best players.

“They were missing one of their best guards,” Tigers head basketball coach Kelvin Lett said. “So, we took advantage of that by pressing early in the game.”

Greenville’s Johnathon Powell went east to west on a full-court drive to make it 21-4 with 1:23 to go in the opening period.

To start the second, Smith nailed back-to-back 3-pointers to give the Tigers a commanding 32-9 lead.

Late in the first half, Powell showed his dunking skills with two — one made in traffic — for a 46-11 advantage; and topped them off with a 3-pointer before the buzzer as the Tigers led 49-11 at halftime.

GHS let off the throttle a little in the third period, but kept the gas flowing as it went on to outscore the Eagles 15-7 to go into the fourth with a 64-18 lead.

When asked if he thinks his team is jelling at the right time, Lett said that’s something the guys are “working toward.”
“We’re trying to peak at playoff time,” he said.

Lett said he hopes people will come and watch the boys play Saturday.

Anjoy Castleberry added much-needed physicality to the Lady Eagles’ offense, but it wasn’t enough to stop the Knights from rolling... read more