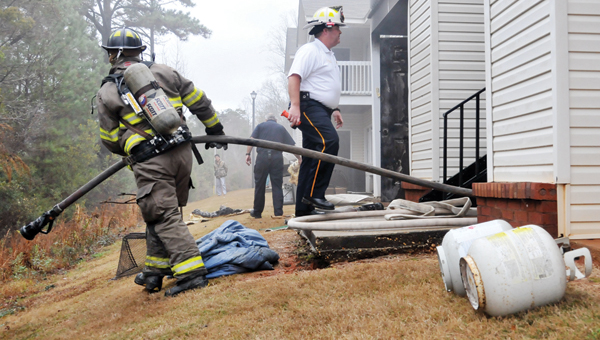 Tim Jay’s nap Tuesday afternoon lasted a lot shorter than he was expecting.

The Cambrian Forest Apartments resident was jostled awake to the complex’s manager beating on his door, telling him to exit because a fire broke out at a unit nearby.

“I happened to get off of work, so you could say it was like fate,” Jay said.

Jay and Cambrian Forest maintenance worker Manuel Flores quickly started to douse the flames outside of apartment No. 106 with a fire extinguisher and trash cans full of water.

Flores said he got most of the flames, which eventually crawled up to the second floor balcony from the apartment’s outer porch, where it’s believed it originated.

“The fire started moving up the vinyl siding to the top at the balcony,” Flores recalled.

GFD Chief Chad Phillips said upon arrival, they noticed “smoke” in the rear of the apartment.

“Upon entry, we noticed a fire on the outside porch, with the extension up to the second-floor balcony,” Phillips said. “We extinguished the fire and performed our salvage and over hall. At this point (Tuesday afternoon), we’re trying to determine what the cause is.”

Phillips said the fire, which resulted in no injuries, is under investigation.

“Most of everything was confided to the porch and outside,” he said.