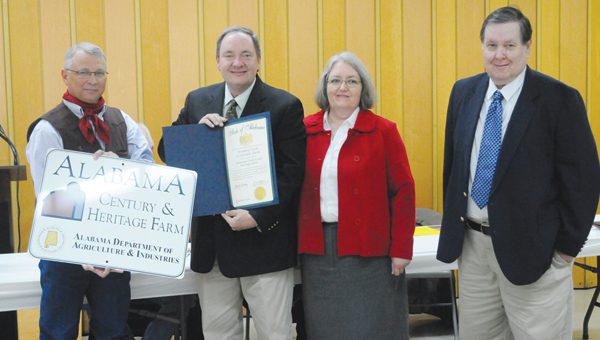 Dr. Tony Frazier awarded John Mark, Jennifer and Stephen Shell with the Century and Heritage Farm Recognition award for Brushy Creek Crossroads Farm. Their farm was the latest of 550 farms since 1976 to achieve the distinction, including nine others from Butler County. The farm has been owned and operated for more than 100 years. | Advocate Staff / Jonathan Bryant

Various members of the community gathered Tuesday to shine a much-deserved spotlight on the hands that feed Butler County for the annual Farm City Week.

Dr. Tony Frazier, Alabama state veterinarian with the Alabama Department of Agriculture and Industries, served as guest speaker for the event.

Among a number of amusing anecdotes, Frazier’s message was one of vital concern to farmers and non-farmers of the Butler County area.

Chief among Frazier’s concerns were dispelling the misconception that animal production in the United States is being handled incorrectly, due to the steroids and hormones livestock are often subjected to prior to being served to customers.

“If you fed chickens steroids, it’s going to be denatured just through their digestive tract,” Frazier said.

“So we would have to inject them every 90 minutes for it to have any effect over the lifetime of that chicken.  It’s just inconceivable.”

In roughly 36 years, Earth’s population will have blossomed to nearly nine billion people—a figure that dwarfs today’s estimate of more than seven billion.

However, the soil used to produce food for that population is nearly depleted.

“How will we feed nine billion people?” Frazier asked.

Frazier’s final plea was a call to all farmers to reiterate the importance of their craft to the outside world, and to do so with the correct information in hand.

“We must take this message beyond here and talk to those outside of these walls.  That’s going to require some responsibility on our part,” Frazier added.  “We have some work to do.  That’s to be educated, be passionate, try new things and be ready to discuss and engage the consumer.”