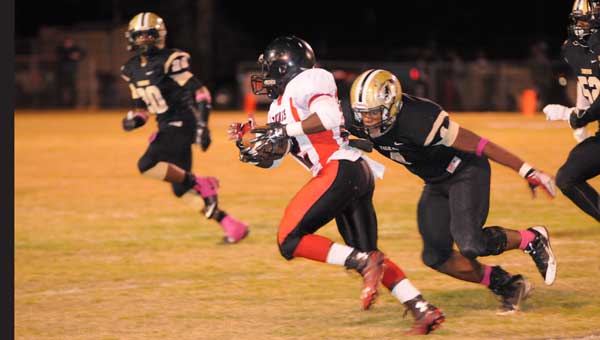 Senior linebacker Mal Caldwell was a constant presence in the Hillcrest Evergreen backfield Thursday night in Greenville’s 34-7 win over the Jaguars.

It was all treats for Greenville High School on the eve of Halloween as the Tigers ran away with a 34-7 victory over the Hillcrest Evergreen Jaguars to close out the regular season at 8-2.

It was a victory that was largely won in the air even without starting quarterback D’raylen McGrew, thanks to a handful of height advantages the Tigers receivers held over the Hillcrest Evergreen defensive backs.

But a traditionally impregnable Greenville defense buckled early in the first half as a Jaguar found himself alone and well behind the Tigers secondary for a 44-yard touchdown to cut an early 14-0 deficit in half.

When it seemed that the momentum had permanently shifted in the Jaguars’ favor, a hard-fought defensive series ended in tragedy thanks to an offsides penalty on fourth and short, giving the Tigers offense new life just outside of the red zone.

For the entire story, see Saturday’s edition of the Greenville Advocate.