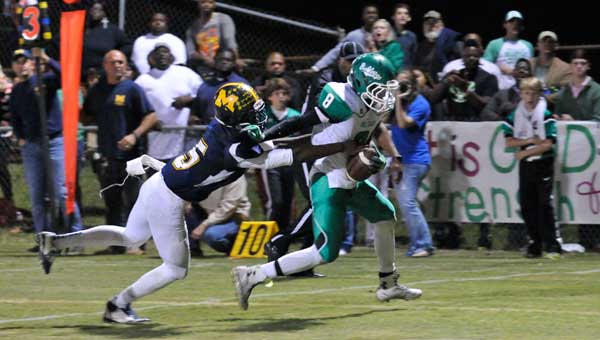 In a clash for the region championship, the McKenzie Tigers were the “unfortunate ones.” That’s how head coach Josh McLendon characterized a 49-6 loss to the Brantley Bulldogs.

“They played really, really well. Hats off to them,” McLendon said of the Bulldogs. “They played extremely hard.”

The Bulldogs came hard at the Tigers from the start, scoring 21-0 in the first half. McLendon said his team could not manage to dig itself out of that hole.

“It just snowballed,” he said.

He urged the Tigers to play hard during the half. But Brantley kept up its relentless pace in the second half.

The Bulldogs almost shut out the Tigers, allowing a touchdown with 35 seconds left in the game.

“I thought, overall, we just weren’t physical enough,” McLendon said. “When you’ve got a score like 49-6, there are no highlights.

The Tigers will put their first loss of the season behind them and take on J.U. Blacksher next week. McLendon reminded his team that the season was far from over and far from a wash.

“We’ve got a lot to look forward to; this is not the end of the season,” he said. “God has a plan and He’s going to work everything out.”

The Tigers finished the night completing seven of 15 attempts through the air for 28 yards, and with 30 carries for 120 yards.

Clemons posted the Tigers’ touchdown with a one-yard run.