Brantley head coach Ashley Kilcrease was glad to put homecoming behind him.

“That’s an understatement,” he said. “Homecoming is more for everybody else. It can be a distraction for the team. It gets them off their focus and they start to worry about different things.”

The Bulldogs added another win to the board, shutting Red Level out 47-0. Brantley is now 3-0 in conference play and 4-1 overall.

Kilcrease said he was proud of the win.

“I thought our defense played a lot better than they did the previous week,” he said. “After Georgiana, that was our area of focus.”

Kilcrease also saw improvement in his offensive line. The coaching staff worked on improving how well the line played up front. 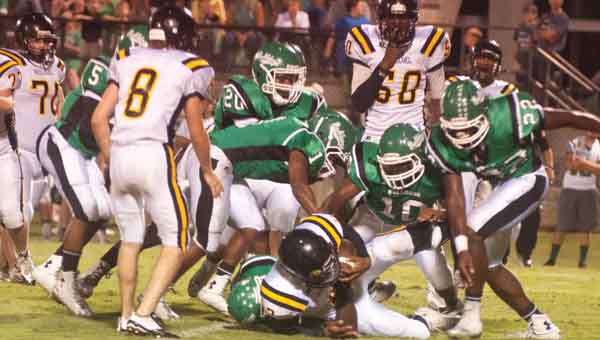 Brantley will take a bus up to Highland Home Friday night. It may not be a conference game, but Kilcrease is not taking it lightly. He said Highland Home has always been a tough place for the Bulldogs to play.

Kilcrease had nothing but praise for the Flying Squadron.

“A sign of a well-coached team is they improve throughout the season,” he said.

The Squadron lost to McKenzie in the team’s first game of the season and finished strong against Zion Chapel last week. Highland Home is 2-1 in region play.

Brantley and Highland Home will take the field Friday at 7 p.m.