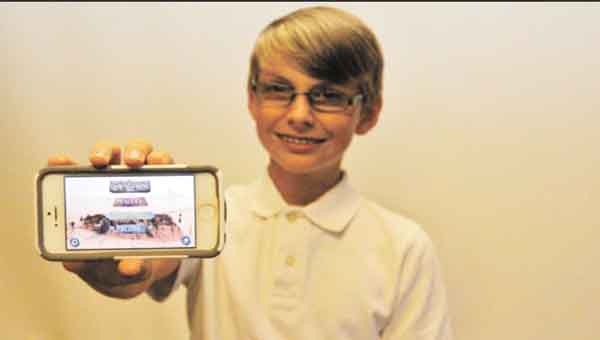 Sam Deloach can hardly contain his excitement. It’s been a long time coming, but the Straughn seventh-grader’s name is officially “in lights” as the developer of a game now available in the app store.

“Well, I was playing a game one day and my mother said that it was too violent or bloody and I should create a better one,” he said. “I had to think on it.”

That was three years ago. Sam and his mom, Beverly Groce, really didn’t know what to do with their ideas.

But in January, the weather – and perhaps, God – changed that.

“In January, the big snow storm came,” Sam said. “My cousins had come over.”

It turned out, Sam also was iced in with his cousin’s boyfriend, Trey Watson, who just happens to be an app developer.

And from that, Bible Warriors, now available in the Apple store, was born. Bible Warriors has the first 3D game texturing in the app store. Players can do battle against Michael, David, Samson or Goliath.

“You get to choose who you are, and choose who you are battling,” Sam explained. Players can use their sheckles (credits) from the game to buy wings, the armor of God, the sword of the spirit, and other items.”

“The developers did it and sent the pictures to us,” Sam explained. “Michael was the first sketch.”

Sam and his mom printed the sketch and colored it to give the developers a better idea of how the characters should look.

When it came time to develop Samson, Sam said, he and his mom wanted the character to be biblically accurate.

“So we told them seven locks of hair,” he said.

Initially, mother and son thought the development would take six weeks, but the process turned in to six months.

“Different things kept coming up,” Beverly said. “Little hiccups in spiritual warfare came into play. It was quite a process.”

Both Beverly and Sam worked on making sure that the elements of the game were biblically correct. Information about each character is provided in the game, and there is a biblical reference to encourage players to open their bibles and learn more.

Beverly said that was an idea she got from Mike Huckabee’s interview with Tim Tebow. When Tebow wore “John 3:16” in his eyeblack during a national championship game, it spawned 90 million Google searches the next day.

“I thought, ‘90 million people just read that verse,’ ” Beverly said. “If we can get people to look up a verse, their lives might be changed.”

In the future, they said, the game will be modified so that users who want to also will get a positive Bible verse sent to them through the game to their phones.

Sam said he knew much about the Bible characters in the game before the process started, but he also learned more during the research phase of the app development.

Once the game was developed, it was submitted to the app store for a review, Sam said.

And it was more difficult, he said, because his mom didn’t want him to talk about it until it was approved.

Bible Warriors was officially released on the evening of Aug. 20, and is available for 99 cents. The legalities of the contracts dictated that the game is listed under Beverly’s name.

As for the proceeds, “that’s supposed to fund my college account, or something,” he said.

The next steps are getting a version of the game developed and approved for Google play, and marketing the game.

“We’re working on that,” Beverly said.

Beverly, who claims not to be technologically savvy, says the game is easy enough for her to play. Sam says he plays as much as his mom will let him.

Why, the two were asked, is Biblical Warriors – a war game born of an objection to violence in video games – OK?

“Well, nobody dies,” Sam said. “There is blood, but not a lot. It’s not like you shoot them and blood spews everywhere. You win or you lose.”

His mom added, “Nobody is maimed and there are no body parts coming off.”

“And there are no zombies coming out of the woods,” Sam said.

Both Michael and David emit bursts of light, they said.

Both mom and son agree: They believe it was God’s will that they were iced in with an app developer.

When Sam finally got to share his news, he told Ms. Thomasson, who was his teacher last year.

“She said that there is a lot of Christian stuff coming out, and more Christian books. She said she believes the Lord has a plan to have everyone know Him more. With this, I am a part of His plan.”

Sam, who wants to work in a technology field one day, believes that, too. His ultimate life goal is to develop a water-powered automobile.

In addition to gaming, he plays trumpet at Straughn and is marching for the first time this year. He also is active in the youth group at Mt. Zion United Methodist Church.

To anyone interested in developing an app, he offers some advice.

“Think about it, write it down on a piece of paper, and don’t try to just keep your ideas in your memory,” he said. “Then, look for investors and find a developer.

Sam is also the son of Lee Deloach of Mobile, and the grandson of Sam and Marie Ellison of Elba.