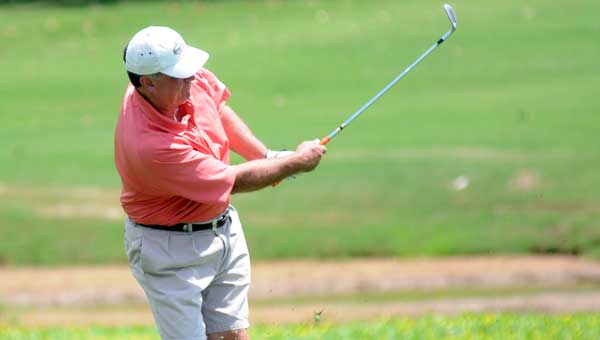 Ed Sims was one of 32 golfers in attendance for the McKenzie Quarterback Club’s first annual golf tournament fundraiser.

The various athletes at McKenzie School won’t be paying out of pocket for a small expenses like pre-game meals, equipment and summer camps, thanks in no small part to the McKenzie Quarterback Club’s first annual golf tournament fundraiser at Cambrian Ridge Wednesday.

Golfers came from near and far to participate, with 32 participants in all, and McKenzie head football coach and tournament organizer Josh McLendon said that the participants and corporate sponsors combined to contribute nearly $12,000.

“It’s a good amount of money for the first time, and we had some big time help from AIA, a recycling corporation here in Greenville, Goodwyn Mills and Cawood, CDG Engineers, Power South, Hysco and more,” McLendon said.

Though the middle of the week may seem like an uncommon time to host a golf tournament, McLendon added that the Wednesday scheduling was by design.

It was an approach that literally paid off in dividends.

“I actually like having them in the week, because I think it gives the people that play the chance to take off work,” McLendon added.

“And people are busy and have a lot of stuff going on during the weekend, and I think a lot of these men that play in these tournaments are going to take advantage of a chance to take a day or a half-day off work if they can.”

The team of Steve Brown, Josh Pierce, Mitch Thorn and Bill Lewis took the first-place finish on the day, each netting a $200 gift certificate for Cambrian Ridge’s pro shop in the process.

But the certificates weren’t the only prizes for the day, as the McKenzie Quarterback Club also auctioned off a pair of New Orleans Saints tickets as well as a signed flag from two-time major championship golfer Angel Cabrera.

But most of all, McLendon is happy to have delivered an experience that people enjoyed, and will hopefully return to in the future.

“I think overall it was a great day, and I think it was definitely worth us doing,” McLendon said.

“We’re going to look at doing it a little early next year, maybe at the end of April or the first of May, but we’re going to continue to try to raise that money as much as we can.  But we had a great time.”