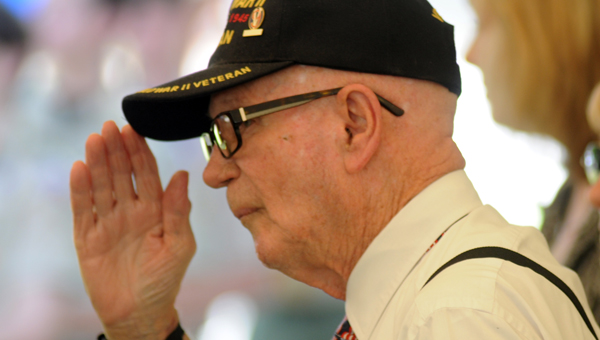 “This memorial service is so special,” said Lions Club President Tommy Ryan. “This is the 11th straight year we’ve had this service, and we plan to do it for another 100. This is our opportunity as the Lions Club and community to remember the brave men and women who were wounded in conflict, and especially those who paid the ultimate price for our freedom.”

Lion Hubert Little, quoting from John 15:13, reminded the crowd that there is no greater love than to lay down one’s life for another.

“We’re here to salute our fallen veterans,” he said. “May they never be forgotten.”

Jim McGowin honored those soldiers, sailors, airmen and Marines who gave their lives in combat with the playing of “Taps”.

“It reminds me of all the friends that I had, and quite a few of them are not here anymore,” he said. “And I was one of the lucky ones that came through.”

Stabler, along with the other World War II veterans in attendance, was recognized by name during Monday’s service.

All veterans present were given the opportunity to take part in the Walk of Honor, and received a round of applause from community members.

The keynote speaker for this year’s event was Nimrod Frazer, author of “Send the Alabamians, World War I Fighters in the Rainbow Division.”

Frazer is the son of a soldier in the Rainbow Division.

“He served with these guys. They all left here when they were 19 and went to Europe and fought there,” he said. “It was the biggest thing in his life ever.”

According to Frazer, six Butler County men were killed at the Battle of Croix Rouge Farm in Fère-en-Tardenois, close to Château-Thierry, in France.

“They served with such great inspiration in an arduous and dangerous time,” Frazer said.

In 2005, Frazer became a founder and benefactor of the Croix Rouge Farm Memorial Foundation that commemorates the role and service of the 167th (Alabama) Infantry Regiment, a National Guard unit of the 42nd “Rainbow” Division of World War I. The memorial is located on the site of the Battle of Croix Rouge Farm.

A tank platoon leader in the Korean War, Frazer was decorated with a Silver Star for gallantry in action.  He is also a member of the Alabama Business Hall of Fame, and a graduate of the Harvard Business School. He is a member of both the American Legion and Veterans of Foreign Wars.