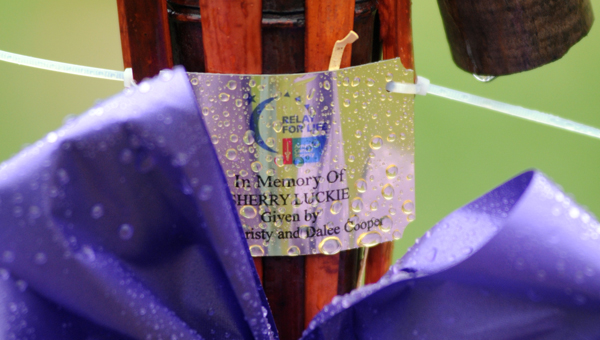 Heavy rains swept through Butler County on Friday and made for a soggy evening, but that didn’t stop community members from taking part in the county’s annual Relay for Life event, which was held at the Greenville YMCA. While lightening did force the event to end early, organizers say the event, which raised nearly $68,000, was a success. (Advocate Staff/Andy Brown)

Not even heavy rains could dampen the spirits of those gathered at Friday night’s Butler County Relay for Life.

The event, which serves as a fundraiser for the American Cancer Society, helped raise $67,970. While that’s shy of the goal off $78,000, organizers say money is still coming in.

“We’re a little shy of our goal, but we do still have several teams that need to turn in money, so I think that we will get very close to our $78,000 goal,” said chairman Marie Owens. “Since we did have to call the event early due to lightning strikes we plan to have a ‘wrap up’ meeting and would like for all of the teams to attend. We have not decided on a location or time as of yet.

“At that meeting we will announce all of our Relay winners including Spirit of Relay, top individual fundraiser, top team fundraiser, etc.  We are planning to finish our activities that we had planned such as Relay Cranium and Relay Idol.  This will also give teams who need to turn in money a chance to do so, and if a team needs just a little extra boost to reach the next fund raising level they will have the opportunity.  We plan to have the slide show that was prepared for the honorees of the Torches of Hope, that we were unable to show due to the weather.  We would also like to have a balloon release as a luminaire celebration.  Because this is what Relay for Life is all about – honoring the survivors, remembering those who lost their fight, and continuing the fight to find a cure.”

Despite heavy rains blanketing the area for much of the day, Owens said the event was well attended.

“We had a much better turn out than I had expected, given the horrible weather,” Owens said. “I was completely surprised at 9 Friday morning when I arrived at the site there were already several teams setting up and teams were in and out all day despite the weather. The heavy rain did hold off until the most important part, the Luminaria Ceremony, was completed, and for that we are grateful because after all this is why we relay.”

The Luminaria Ceremony takes place after dark, so those in attendance can remember people who have lost their lives to cancer, honor people who have fought cancer in the past, and support those whose fight continues. Candles are lit inside of personalized bags and are placed around the Relay track as glowing tributes to those who’ve been affected by cancer.

Owens said she hopes that the decision to hold the event despite the weather serves as a symbol for the communities commitment to battle cancer.

“Cancer patients don’t stop having cancer because the weather is bad and I hope the message was that we don’t want to stop raising money for a cure because the weather is bad either,” she said. “That is the reason we relay all night and walk the track all night – cancer patients get tired but they can’t give up, if they have to keep fighting to live when they are tired, surely we can keep supporting them by walking one night even when we are tired or if it’s raining.”

And the fight continues. Organizers have already started discussing next year’s event.

“Gerri McGinnis and I have talked all weekend about what changes we can make in order to make 2015 the best Relay for Life yet, and we have definitely come up with a few ideas of our own,” Owens said.

“And of course, we are always open for new and fresh ideas and can always use extra help, if anyone is interested in helping with Relay for Life please contact me as we begin preparations for Relay for Life 2015.”

Owens can be reached at mowens@fcbl.com.