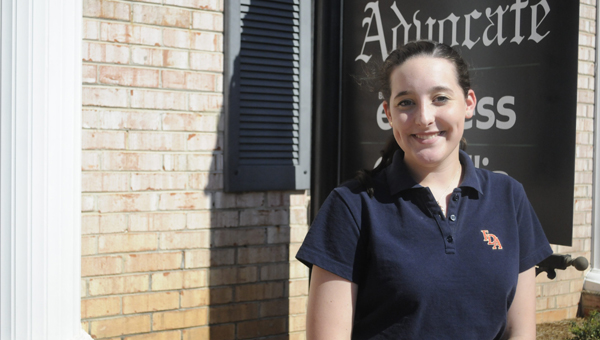 Anna Wright, a freshman at Fort Dale Academy, has been accepted to the Alabama School of Mathematics and Science in Mobile. (Advocate Staff/Tracy Salter)

Anna Wright, a freshman at Fort Dale Academy, has been accepted to the Alabama School of Mathematics and Science in Mobile.

The Alabama School of Mathematics and Science, the state’s only fully public residential high school for sophomores, juniors, and seniors, is founded on a rigorous math and science curriculum with emphasis on responsible leadership.

ASMS enrolls 275 students each year and was ranked by Newsweek magazine as a top 10 public high school in Alabama and as a top high school in the nation.  Since 1993, ASMS has graduated more than 1,600 students, more than 400 of whom have earned post-graduate degrees.  Admission requirements are evaluated in three areas: academic achievement, maturity, and leadership in school community and religious organizations.

Wright, who set a personal goal to attend ASMS more than two years ago, said that she is looking forward to a challenging curriculum.

“I love to learn,” said Wright.  “I want to be challenged and I feel that ASMS is going to give me an opportunity to grow academically and personally.”

Wright has been a student at Fort Dale Academy since she was in the second grade and has been a part of the dance team for the last three years.

In addition to dance team members and friends, Wright said that it is going to be a big adjustment spending time away from her parents, her sister and her grandparents.

“I will live on school campus during the week and come home on weekends and holidays,” she said.

“I really became excited about history this year when I got the chance to study with Mrs. Faulk.  She came to Fort Dale this year and she is pretty amazing.  I love learning from her,” said Wright.

Wright is undecided about future plans for college and career, but said she likes the campus and study opportunities at Auburn University.

“I take things one day at a time,” said Wright.  “I set goals, work to attain them, and then take it one step at a time towards the next goal.”

Wright will start her sophomore year at ASMS in August.

“I am very happy about this opportunity and so thankful for the support that has been given to me along the way,” said Wright.

Wright is the daughter of Keith and Nancy Wright and granddaughter of Larry and Dian Blackburn, and Charles and Eulene Wright.