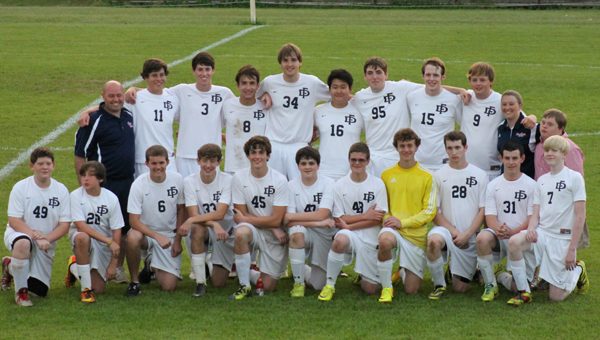 “It was a fun night and a great memory for these eight seniors to go out on,” said FDA head coach Josh Wildermuth.  “Six of our seniors scored tonight and all eight have scored this year.  They have been a great bunch to work with.”

Fort Dale would score just 2 minutes into the game on a goal by Kaleb Piggott with an assist from Cole Davis.  John Coleman Poole scored at the 33:26 mark on a header to the right side of the net off of an inbounds pass from Michael Padalino.

Hudson Branum scored on a kick with 28:16 remaining in the first half with an assist from Tyler Gibson and Price Jones would give Fort Dale a 4-0 halftime lead on a goal with 9:17 remaining.

The Eagles would go on to score 3 more goals in the second half.  Cole Davis scored on a long kick over the goalie’s head with 26:33 remaining.  Clint Harrison scored on a kick with 5:02 left with an assist from Taylor Thomas and Michael Padalino capped the scoring with a goal with 2:24 remaining in the contest.

The Eagles had a 17-7 advantage in shots on goal.  Goalkeepers Taylor Thomas and Jake Gillem recorded a combined seven saves in the shutout.

The Eagles (8-5) finished in second place in the region with a 5-3 record. They will host Lee-Scott in a quarterfinal showdown Monday at 6 p.m.