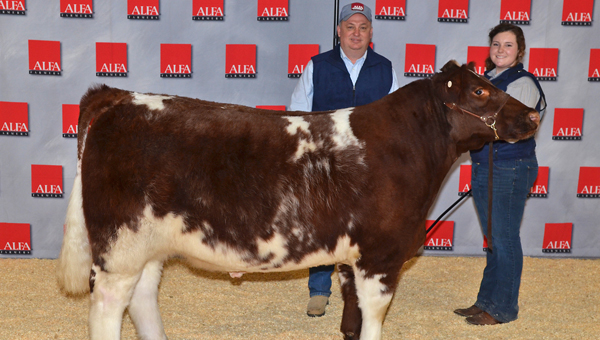 More than 150 young people recently participated in the 2014 Alabama Junior Beef Expo at the Garrett Coliseum in Montgomery in the junior, intermediate and senior divisions of the showmanship competition. Pictured with Alabama Farmers Federation President Jimmy Parnell is Cameron Catrett of Crenshaw County, reserve champion of the intermediate division. Champions in each division received $600, and reserve champions received $400. (Courtesy Photo)

Sponsored by Alfa Insurance and the Alabama Farmers Federation, students groomed and showed heifers and steers of various sizes, breeds and colors.

Judge Deb Core of Pleasantville, Iowa, complimented the young Alabama showmen as they led their calves around the ring.

“This is my first trip to Alabama, and I don’t know what I expected, but competition is alive and well here,” she said. “You have done an outstanding job preparing your calves, and it shows.”

The showmanship classes were part of the Southeastern Livestock Exposition, which included the State Steer Show, which was held Friday.

For 10-year-old Christy Daniel of Hayneville, today’s show was exciting and a little nerve racking.

“I’ve enjoyed it,” said the fifth-grader from Catoma Elementary School. “I’ve learned a lot and had fun.”

Federation Jimmy Parnell said sponsoring programs like the calf show is at the heart of the organization’s mission.

“Seeing all these young people with their families and knowing they are interested enough to be here is encouraging,” Parnell said. “There are a lot of good things young people can be involved in, but we need to provide all the encouragement we can to those who are interested in agriculture.