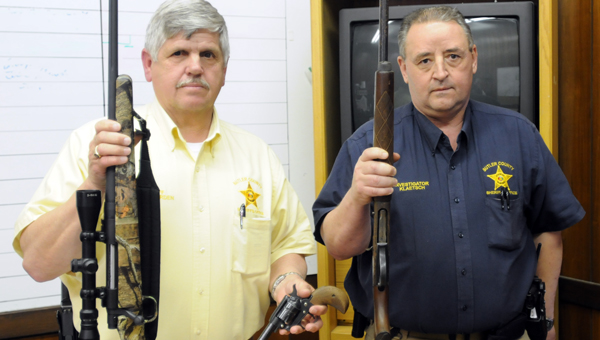 An Andalusia man was arrested Wednesday for multiple counts of burglary.

The Butler County Sheriff’s Office arrested Timothy Mark Jackson, 28, and charged him with three counts of burglary related to a string of break-ins in Butler County.

“We determined he was our suspect, and we went and picked him up and brought him back here for questioning,” Butler County Sheriff Kenny Harden said. “We interviewed him and he confessed and told us that he broke into houses and looked for guns and televisions. He then told us that he had sold some of the items and where we could find them.”

“We’ll return the shotgun to its owner, and return the other two guns to the Covington County Sheriff’s Office,” Harden said.

According to Harden, Jackson was on probation.

“Now he’ll have 12 years plus whatever (time) he gets for these burglaries,” Harden said.