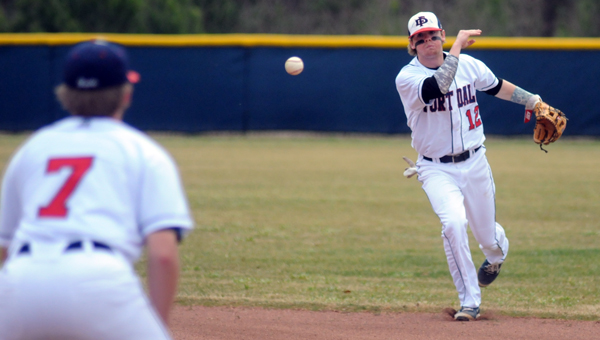 Fort Dale Academy’s Drake Cabe fires the ball to first base during the Eagles’ 8-1 win over South Montgomery County Academy on Monday. Cabe was 2-for-3 with a pair of doubles and an RBI in the first of two wins over the Raiders. (Advocate Staff/Andy Brown)

We hit the ball pretty well up and down the lineup,” Beverly said. “We had a few defensive miscues that need to be fixed, but overall I was pretty pleased with our play on opening day.”

In Game 1, the Eagles plated three runs on singles by Ryan Burkett and Chase Whiddon and a double by Drake Cabe.

While the Eagles would tack on five more runs, the first inning outburst was enough for hurler Austin Vickery.

Vickery went 6 1/3 innings and allowed just one hit and one run, while striking out six.

Cabe was 2-for-3 with a pair of doubles and an RBI to pace the Eagles at the plate.

Whiddon was 1-for-3 with an RBI and Brady Calrk was 1-for-1 with two RBIs.

In Game 2, the Eagles once again plated three runs in the first inning on singles by Chip Taylor, Whiddon, James Burkett and Vickery. All three runs came with two outs in the inning.

The Eagles added a run in the second when Taylor, who singled to reach base, scored on a wild pitch. In the third, the Eagles pushed two runs across on an RBI single by Dalton Hood and a Raider throwing error.

Ryan Burkett, James Burkett and Cabe all scored in the inning. Vickery drove in a pair of runs with a sacrifice fly to right field.

An RBI double by Cabe in the fifth inning that played Kenny Harden sealed the victory for Fort Dale.

Taylor earned the win on the mound after tossing four innings and allowing just one hit. He struck out four.

“Both guys on the mound threw well and we expect that to be a strong spot for us this year,” Beverly said.

The Eagles traveled to face Lowndes Academy on Tuesday. Results were not available at press time.