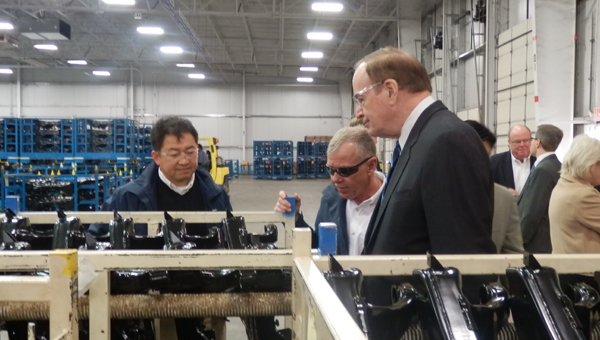 And though his stay was relatively brief, the automotive manufacturing plant made a long-lasting impression on him.

“This year I’m visiting businesses that create jobs, and I chose to come here because I knew it was vibrant, I knew they created jobs, and I knew that people worked hard to get them to come here,” Shelby said.

“And they’ve got more jobs here than I thought, and they’re going to keep expanding.”

For nearly 27 years, or since the beginning of Shelby’s first term in the U.S. Senate, he has held more than 1,800 county visits in Alabama.  His latest statewide tour will cover all 67 counties.

On Monday, he visited Shaw in Andalusia, Wilson Iron Works in Brewton and Crenshaw Community Hospital in Luverne.

After touring the facility and speaking with staff members, Shelby concluded that the importance of having a company like Hwashin could not be understated, and that its effects could be felt well beyond the Camellia City.

“It makes a huge difference — the investment here, the payroll here and the quality of jobs here … it makes all the difference in the world not only in Greenville and Butler County, but in the whole regional area,” Shelby said.

“It’s positive stuff, and that’s what we need more in America — not more regulations, but jobs.”