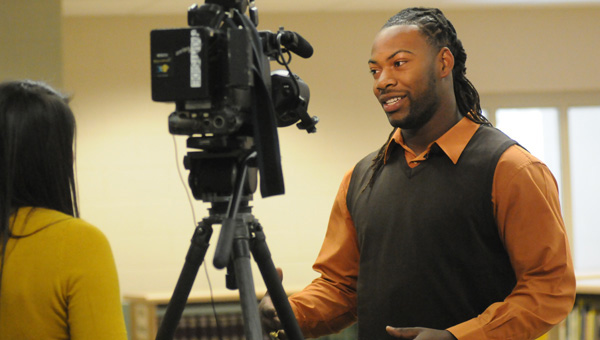 Greenville native Za’Darius Smith, who signed to play football at the University of Kentucky last December, announced on Dec. 13 that he will forgo the NFL draft and return to school for his senior season. (File Photo)

Smith, who signed to play football at the University of Kentucky last December, announced on Dec. 13 that he will forgo the NFL draft and return to school for his senior season.

“Big Blue Nation, I have made my decision. I will be staying in Lexington another year,” Smith said.

“We are very excited that Bud and Za’Darius have decided to return,” said Stoops. “Obviously this is big for our team as we are counting on their leadership in the 2014 season. In regard to their futures, I believe Bud and Za’Darius will benefit greatly with another year of development on the field, in the weight room and in their academics.”

Smith, who played just one year of high school football at Greenville High School before starring at East Mississippi Community College, was one of the top pass rushers in the SEC this past season.

Smith had a standout career at East Mississippi Community College where he helped the Lions win the 2011 NJCAA Football National Championship as a freshman.
As a sophomore, the Greenville native ranked as the Lions’ leading tackler among defensive linemen with 47 total stops, including 30 solo tackles and a team-best 6.5 sacks. He was also credited with four forced fumbles, two pass breakups and an interception during his sophomore campaign.
Smith finished his two-year stint with the Lions with 66 total tackles, including 45 solo stops, 11 sacks and seven other tackles behind the line of scrimmage.
The former basketball standout at GHS, was ranked by JCGridiron.com as the nation’s top-rated junior college strong-side defensive end.