Lions roar past FDA in second half 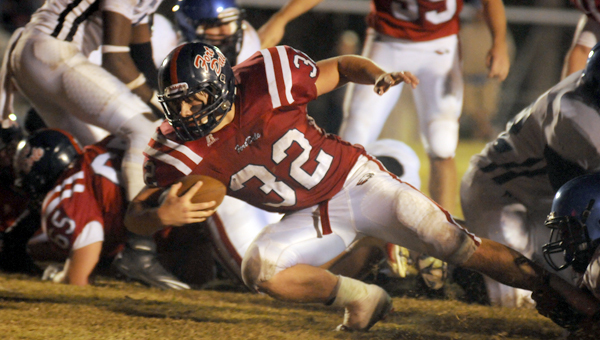 The loss was the fourth straight for the Eagles, who opened the season by winning six of their first seven games. They finished the season with a 6-5 record.

“We just didn’t get it done,” Fort Dale head coach James “Speed” Sampley said.  “I felt like we had chances to win the game, but we couldn’t score when we needed to.”

Kingwood Christian struck first when quarterback Gavin Sumrall scampered into the end zone from 8 yards out with 5:05 to play in the first quarter. After a successful point after attempt, the Lions (9-3) led 7-0.

But Fort Dale would answer.

After a 20-yard and 19-yard run by quarterback Chip Taylor, and a facemask penalty against the Lions helped move the Eagles deep into Kingwood Christian territory, running back Sawyer Kendrick barreled into the end zone from 3 yards out for the score. Trent Brooks added the point after attempt to knot the game at 7-all.

The Eagles took the lead with 8:49 to go in the first half on a 27-yard pass from Taylor to senior John Coleman Poole who snagged the ball in the back of the end zone and then tumbled over the rope surrounding the field. Brooks split the uprights and the Eagles led 14-7.

After a 3-yard scoring run by Kingwood Christian’s Jonathan Faulkner cut the lead to one point, senior Chase Whiddon plunged into the end zone from 1 yard out with four seconds to play in the half. Brooks’ point after gave Fort Dale a 21-13 lead at the intermission.

But the Eagles offense would never regain its momentum coming out of the break.

“I really felt like we played well enough on defense to win,” Sampley said. “They ran an interception back for a touchdown, and we had at least four stops on defense and then we weren’t able to capitalize on those stops and score. You’ve got to be able to score to win.”

Faulkner added a second touchdown in the third quarter, and Montez Haynes returned an interception for a touchdown, caught a 39-yard touchdown pass and kicked a 40-yard field goal to help secure the win for the Lions, who were making their first appearance in the postseason since 2007.