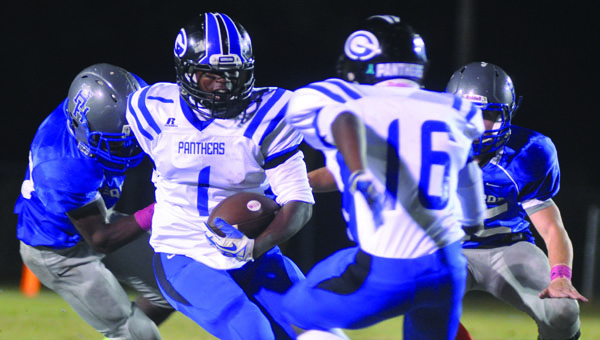 The Flying Squadron soared out to an early lead when Donate Lee scored a 17-yard touchdown with 8:02 left in the first quarter, and Andrew Akers’ PAT put the Squadron up 7-0.

With 25 seconds left in the first quarter, HHS’s Chris Wooten scampered into the end zone and Akers’ PAT was good, putting HHS up 14-0.

The Panthers finally got on the board with 9:31 left in the second when Tarien Crittenden ran 27 yards for a score and Cameron Longmire ran in the two-point conversion, narrowing the score to 14-8.

Wooten ran 45 yards with 8:25 left in the second quarter and Akers’ PAT was good, giving Highland a 21-8 lead.

Donate Lee scored the Squadron’s next play from 8 yards out with 6:30 left in the second and Akers put the ball through the uprights, extending Highland’s lead 28-8.

Highland’s Tristan Price scored with 21 seconds left in the half and Akers was once again successful, putting the Flying Squadron up 35-8 at the half.

The Panthers struck first in the second half with 7:51 left in the third and Highland’s Lee blocked the extra point, putting the Flying Squadron up 35-14.

Wooten scored again for the Flying Squadron with 5:51 left in the third, but Akers’ PAT was no good. Highland Home extended its lead 41-14.

Highland Home’s Lewis Johnson intercepted a Panthers pass with 5:30 left in the third quarter and Johnson ran it in with 5:23 left in the third. Akers’ PAT was good, putting the Flying Squadron up 48-14.

Austin Sexton scored the Squadron’s next touchdown with 11:14 left in the fourth and Akers’ put the ball through the uprights, extending the Fly Boys’ lead 62-14.

Freshman quarterback Chase Mansmann scored the last touchdown of the night with 3:35 left in the game, and Akers’ PAT was good.

Georgiana head coach Ezell Powell told his players after the game they put up a great effort all season long.

“We just got to keep pushing and keep getting better,” he said.

Flying Squadron head coach Tom Pinkston said his team made a few adjustments this week and covered the pass a lot better.

“We didn’t make as many mistakes either,” he said. “We played well on offense and defense.”

Pinkston and the Squadron will travel to play Washington County next week in the first round of the 2A state playoffs.

“It’s a tall task,” he said. “We’ve got to put together a good plan, not make mistakes and try to stay in the game.”

The Panthers end their season with a 4-6 record.