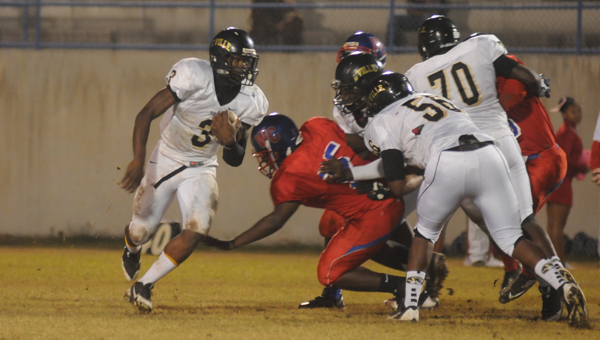 On Monday the Tigers were in a three-way tie with Selma High School and Demopolis High School for the final two playoff spots from Class 5A, Region 3.

On Tuesday the Tigers learned they would have to forfeit victories over Citronelle High School, Satsuma High School and Sumter Central High School after self-reporting to the Alabama High School Athletic Association that an academically ineligible student played in the three wins. The forfeits eliminated the Tigers chances at the postseason.

Following Thursday’s win, the second shutout in a row for the Tigers, Greenville head coach Earnest Hill praised his team for its effort and the way it responded following Tuesday’s announcement.

“I’m very proud of these guys,” Hill said. “They came out knowing it was going to be their last game, and they gave great effort. It was an unfortunate mistake that ended our season, and I want to apologize to the public, to the Greenville High fans, and most of all to these players for that mistake. I just appreciate the way the guys came out tonight and put that behind them, played hard, and got a win.”

After surrendering the three wins, the Tigers will finish the season with a record of 2-8 and 1-6 in region play.

Greenville shook off a sluggish start on Thursday to earn its sixth straight win over the Jaguars (3-7).

After a scoreless first quarter, the Tigers found the end zone with 8:48 to play in the second quarter when quarterback Jerome Watkins connected with wide receiver Michael Smith for a 1-yard touchdown.

Just more than five minutes later, Watkins heaved a 60-yard scoring pass to Javarrius Cheatham for the second touchdown of the game and a 14-0 Greenville lead.

Not to be left out, the Tiger defense got in on the act when linebacker Joey Purifoy intercepted a deflected pass inside the 10-yard line and returned more than 90 yards for a touchdown. Following Winston Simms third successful point after attempt, the Tigers led 21-0 with four seconds remaining in the first half.

Greenville’s final score came on a 3-yard touchdown run by Watkins. The Tigers then faked the extra point and Cheatham scampered into the end zone.

“That was a great way to end the season,” Hill said. “We played like we are capable of playing and the guys had fun. That’s what I want from them every game. I want them to have fun playing the game of football. As long as they play hard and have fun, we’ll win football games.”