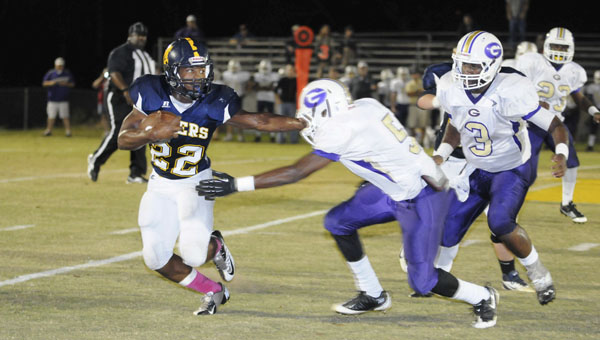 As all eyes watched the seconds tick off the game clock, time proved the bigger enemy for the McKenzie Tigers as the Goshen Eagles held on to a 20-14 win to break even on the 2013 season.

The final four minutes and 55 seconds of play were dominated by a deliberate and methodical Eagles ground attack, punctuated by several hard runs from Goshen quarterback Deangelo Orum.

For Goshen head coach Bart Snyder, the non-region win meant as much, if not more, than any other win this season.

“We have been on the verge every ball game—we’ve just made some little bitty mistakes,” Snyder said.

“We knew coming in here that McKenzie was—and is—a very good ball team, and it was going to take our best effort, and that’s what our kids came out and did.  They played four great quarters of football.

“They all did an outstanding job, and I’m very proud of what this coaching staff has done and, most importantly, what these guys and the community of Goshen have done.”

Running back Terrainno Griffin got the ball rolling for Goshen by picking up an early fourth down and then some with a 31-yard sprint down the sideline.

A quarterback keeper up the middle from Orum would set up Griffin for an easy six-yard scamper for the Eagles’ first score on a clock-crunching drive that left the opening quarter more than half spent.

But the Tigers would only need a few minutes to respond as freshman quarterback William Brown found Nicarious Peterson in stride for a 40-yard touchdown strike, but a missed point-after attempt would leave the Tigers trailing 7-6.

The second quarter was one largely dominated by the Eagles defensive line, led by Earnest Green, as neither McKenzie quarterback could find time to establish any semblance of rhythm.

Meanwhile, Orum would punch in the second Goshen score of the night after dragging several McKenzie jerseys with him for a six-yard score, giving the Eagles a 14-6 lead.

On the following drive, however, Peterson would come down with the second of two momentum-changing catches of the night for McKenzie—this time one-handed—for a 50-yard touchdown reception, and a successful two-point conversion evened the match at 14 points apiece.

A deflated Eagles offense struggled to respond with Orum blowing a wide-open pass to Damian Brundidge for an easy first down, forcing what could have been the costliest punt of the night if not for a touchdown-erasing penalty.

The call instead proved the difference between a six-point Tigers lead and an unmanageable third-and-forever situation, forcing both sides into a stalemate at the half.

The stalemate continued for the duration of a scoreless third quarter, and it wasn’t until nearly halfway through the fourth that Orum found a chink in an otherwise impressive McKenzie defense to set up Griffin for a two-yard nail in the coffin.

The Tigers were plagued by a dominating Eagles defensive line that walked away with half a dozen sacks before all was said and done.

“They were very fast and athletic, and they had a good game plan,” said McKenzie head coach Josh McLendon.

But McLendon added that the valuable experience against a physical Goshen team would be instrumental moving forward into postseason play.

“That’s why we play teams like this, to prepare us for what we’ve got to do,” McLendon added.

“It’s a good test, and I wanted to be able to see where we were at going into the playoffs, and we’ve got a lot of work.  But we’ll be fine.”

McKenzie hosts the Wadley Bulldogs (4-5) as their first postseason opponent next Friday, while the Eagles will travel to see the Sweetwater Bulldogs (7-2).