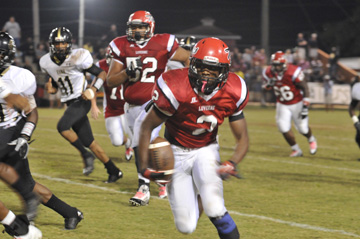 The hype of this game was true to the word as the Luverne Tigers came out on top with a 26-14 win over the Elba Tigers.
Elba received the ball on the opening kick off only to go three and out to begin the battle of the Tigers.
Elba’s punt was blocked by Luverne’s Quindarius Thagard setting up the first touchdown run by Jonathan Chambers from the 4-yard line.
The PAT was good by Jon Hayden Sanders making the score 7-0 with 9:17 left in the first quarter.
Elba got on the board next, when Darrean Burks ran the ball in for the TD and the pass from Ramsey Rigby to Grant Akridge was good putting Elba ahead 8-7.
Luverne had possession of the ball going into the second.
A pass from Kenterius Womack to Quez Watkins was complete for TD with 11:26 left in the second putting them up 13-8.
Luverne’s defense got on the ball with M.J. May, Thagard and Trey Tyson shutting down Elba’s next drive.
Elba’s defense countered forcing Luverne to go three-and-out as both defenses played smash-mouth football.
Elba drove the ball down the field on its next possession and hit the end zone, but failed to make the two-point conversion, putting them up 14-13 at the break.
Luverne came out ready to play in the second half, when Jonathan Chambers ran the ball in for a TD, with 9:34 left in the third 19-14 to capture the lead.
Watkins intercepted an Elba pass, which set up a Thagard TD and a good PAT, giving Luverne its final score, with 4:59 left in the third.
Luverne head coach Mike Dubose called the game a great one.
“We have a great bunch of guys who rise to the occasion time after time,” he said. “I’m proud of them.”