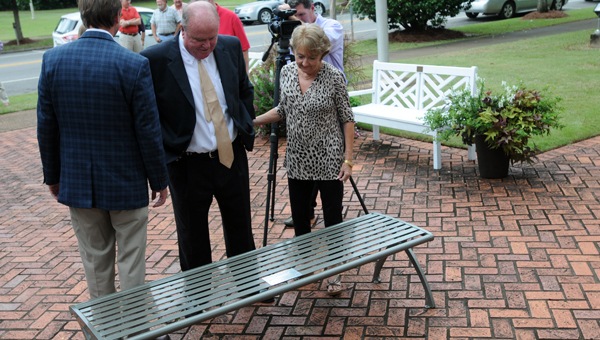 Greenville Mayor Dexter McLendon and Janice McLendon read the inscription on the bench presented to them by officials with Baptist Medical Center South in Montgomery. (Advocate Staff/Andy Brown)

In early July, a gray metal bench at the entrance of Baptist Medical Center South in Montgomery became Greenville Mayor Dexter McLendon’s home away from home.

Dexter spent hours sitting on the bench praying for his wife, Janice, who on July 2 was found unresponsive in a swimming pool.

After her brother Scottie Harper, who was off work from Hyundai Hysco for the Fourth of July holiday, pulled her from the pool, paramedics with the Greenville Fire Department arrived on the scene and transported Janice to L.V. Stabler Memorial Hospital where doctors and nurses worked to stabilize her. She was eventually flown to Baptist South.

In late July, Dexter was invited to speak at Baptist South’s 50th anniversary and share the story of Janice’s recovery with more than 300 employees of the hospital.

During his speech he joked that he was going to send a couple of Greenville city employees to Montgomery to retrieve the bench.

On Wednesday, officials with Baptist South saved him the trouble by delivering the bench to the Camellia City. Hospital officials also had Exodus 33:14 inscribed on the bench.

The inscription reads,” My presence will go with you, and I will give you rest.”

“During that time, I don’t think Dexter ever left the facility,” said Russell Tyner, CEO of Baptist Health. “He left the building a lot, and spent a lot of time on this bench. I heard him on a couple of occasions say that he spent so much time on this bench that one day he was going to get it. I thought, ‘Yeah, you are.’”

Tyner said the bench and the McLendons’ story are examples of how the employees of Baptist South make a difference in people’s lives on a daily basis.

The McLendons view the bench as a reminder of the miracle that God performed through the doctors and nurses at L.V. Stabler Memorial Hospital and Baptist South.

Dexter says the couple plans to use the bench as a prayer bench.