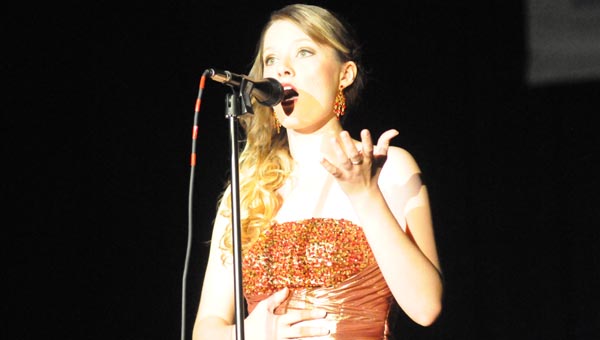 And despite the fact that the designation of Distinguished Young Woman is one purposefully absent of a crown, one would be hard-pressed to convince Teate that the entire affair wasn’t a fairytale princess’s dream come true.

“I was in shock for probably most of the night because it’s something that I’ve worked really hard for,” Teate said. “And I didn’t really expect to get it because it’s one of those things that you want so bad that you don’t want to think you’re going to get it. I was in shock, but I’m very excited to represent Butler County at state.”

After seeing her predecessor, former FDA graduate Anne Matthews, receive the same honor last year, Teate was inspired by the opportunities the DYW title presented her.

But it also showed her the various duties that accompany it.

“Seeing Anne win it last year and all of the things she got to do was amazing,” Teate said. “Sometimes you don’t really realize the responsibilities you have, but seeing her have all of these things to do in the community got me really excited.”

But as is often the case, the DYW experience was one that was not entirely devoid of difficulty.

After all, a program tasked with holding its participants to a higher standard by instilling responsibility, good study habits, nutrition and well-roundedness must also come with a bit of adversity.

Teate recalled one particularly demanding weekend-long practice session in which the girls were tasked with learning their routines, and the group spent the entire Saturday memorizing each one.

“When you do the fitness routine about 20 times in a row, you’re pretty tired,” Teate joked. “And then the whole week before the pageant, we had practices every night, and it was the first real week of school. So it was a lot of work, but it was really fun getting to know everybody.”

But at the end of the day, those opportunities afforded by the DYW program far outweigh the occasional hardship.

Chief among those opportunities is the chance to be an individual that a younger generation could look up to.

“There were a couple of kids who came up onstage and wanted to take pictures with me, and I just thought that was the coolest thing,” Teate said. “I have a lot of passion about being your best self, so I want other kids to see that you can do that. And I’m not always into sports and that kind of thing — and I fully back people into sports 100 percent — but I’m more into the arts, and so I want people to know that they can do whatever they want and follow their dreams, no matter what it may be.”

Teate will go on to represent Butler County at the state level in January.

Along with winning the title of Butler County’s Distinguished Young Woman, Teate also won the talent, self-expression and interview competitions. In total, Teate collected $2,250 in scholarship money and $500 to help offset the cost of competing at the state competition.