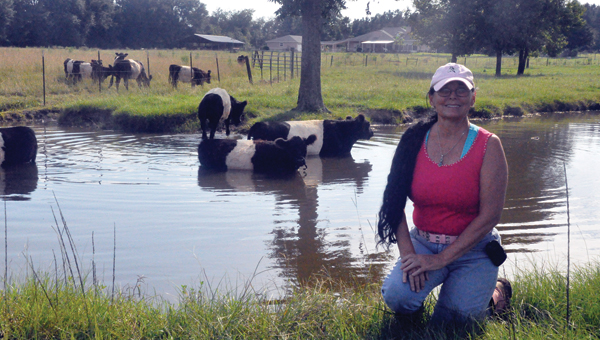 If you pass Pat Floyd’s home on the Montgomery Highway, no she didn’t paint those cows with a white stripe.

The cows in question are her small herd of Belted Galloway, which she’s had for more than a year at her Bama Beltie Farms.

“They’re new to the area,” she said. “People stop by here all the time to see them. A lot of people ask me if I painted them. They are just beautiful.”

Floyd said the breed is popular out west.

“I just picked up five more on Friday,” she said.

Floyd said she grew to love these cows when she learned about them on a trip to the Tar Heel State in her teens.

“I thought they were the neatest cows,” she said. “Then I saw some again a year or two ago and I jumped into it.”

But the breed is hard to find.

So, far she’s built her herd up to 18, and she’s expecting several baby calves in the next week or so.

“You can find bulls, but not heifers,” she said.

Floyd described the animals as having a beautiful, and very sweet disposition.

“Some have a perfect belt,” she said. “I have one that has a narrow belt.”

She also has a rare red and white Beltie.

The cows, who are of Scottish origin, a famous for their quality lean beef, Floyd said.

Additionally, a survey conducted by the Natioanl Livestock and Meat Board and Texas A&M shows that Belties rank high in flavor and juiciness.

Floyd said she would like to spread the word about these cows to the public.