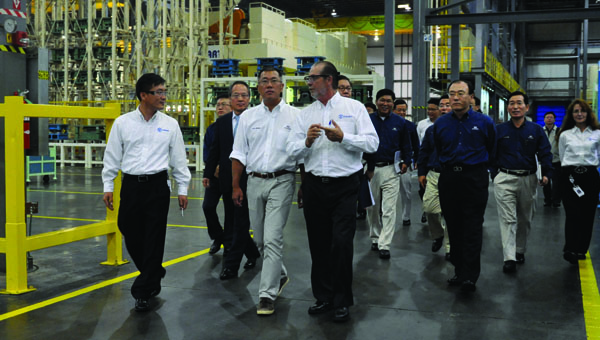 Just days after Hyundai Motors America announced it had set a new record for sales for the month of July, SMART Alabama received a visit from Hyundai Motor Company’s vice chairman.

On Tuesday, Chung Eui-sun, the only son of Hyundai Motor Group chairman Chung Mong-koo, visited SMART and a few other suppliers in the state.

Hyundai sold more than 66,005 vehicles during July, which is 6.4 percent more than it sold during the same period in 2012.

“July was another record-breaking sales month for us and is a great way to begin the second half of the year,” said Dave Zuchowski, executive vice president of national sales. “This is a terrific time for consumers to purchase a new vehicle – industry inventories are being restored, there is ready access to competitive financing terms, and marketing activities and incentive support are running at a fevered pitch. Within that dynamic sales environment, the Hyundai brand is particularly well positioned to compete head-to-head and sustain our record-setting pace throughout the balance of these strong summer months.”

“It’s an economic boon for us,” he said. “As long as sales are strong, we have plenty to do.”

Sport said the supplier employs 700 employees and “we are keeping everyone as busy as they want to be.”

Sport said 90 percent of employees at SMART are local, meaning they drive within a 35-mile radius of the plant.

To keep up with demand, Sport said they are up and running at least two weekends a month.

Company officials said the most popular vehicles are the Santa Fe, Hyundai’s mid-size SUV and the Elantra, a compact car.

Hyundai reported the Elantra saw a 29 percent increase compared to July 2012, while the Santa Fe saw a 48 percent spike in sales during the same period.