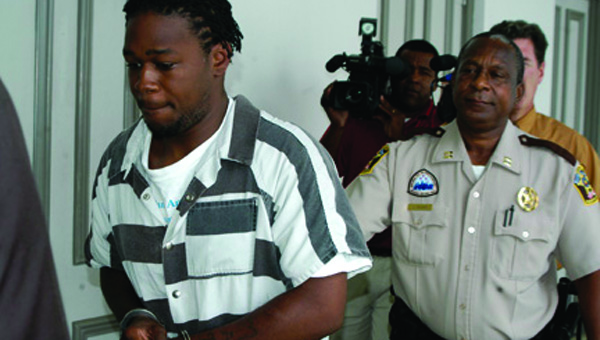 It’s been just more than a year since Lowndes County was rocked by a triple murder that claimed the lives of 9-year-old twins and their 73-year-old caretaker.

“The community was horrified that someone would execute two young defenseless children and an older gentleman. It was disturbing that they were brought to Lowndes County apparently for that purpose,” District Attorney Charlotte Tesmer said.

Tesmer said she expects to try the case against Deandra Marquis Lee for the murders in Lowndes County this October. Lee is accused of killing 9-year-old twins, Jordan and Taylor Dejerinett, from Montgomery, and their 73-year-old caretaker, Jack Mac Girdner of Hope Hull.

The three had been reported missing on June 4, 2012, and their bodies were discovered the following day.

Lee was later declared a suspect in the murders and captured June 9, 2012, huddled in a Selma apartment.

“It is my hope to receive a completed Alabama Bureau of Investigation file before the Lowndes County Grand Jury meets on July 15,” Tesmer said. “Several agencies assisted in the investigation of the case. The lead agent has assured me that he is working with those agencies to retrieve what information they may have collected so that we will have a complete file to present to the Grand Jury.”

Tesmer said her office would be prepared to try the case during that term of criminal court.

The children had last been seen with Girdner June 3, 2012, according to information from the Department of Public Safety. When the children were reported missing on the following day, authorities said they were in the custody of Girdner, who had known the family for “about three years.” They had been reportedly last seen in Montgomery.

According to the ABI, the bodies were discovered by the Lowndes County Sheriff’s Office and the ABI on a dirt road off of Alabama Hwy. 21 near Hayneville, three miles south of U.S. Hwy. 80.

A day later, the ABI confirmed they had recovered the missing 1998 white Mercedes, owned by Girdner. The car, which was missing all four of its doors, was discovered in the Minter community in south Dallas County.

Lee was captured June 9, 2012, in a small apartment in Selma, reportedly huddled in the room with a woman.

Selma Chief of Police William T. Riley said he received a tip that Lee was in an apartment at Merrimac Apartments, located on Medical Center Parkway.

After interviewing the individual who provided the tip, Riley then contacted the other agencies involved in the search, including ABI, the Alabama State Troopers and the U.S. Marshals.  Authorities immediately rushed to capture Lee.

After his arrest, District Court Judge Adrian D. Johnson bound Lee over to the Grand Jury on July 2 finding probable cause after hearing testimony from Alabama Bureau of Investigation Special Agent Matt Bowman.

Lee is being held in the Lowndes County Jail on a $3 million cash bond; $1 million for each murder charge.