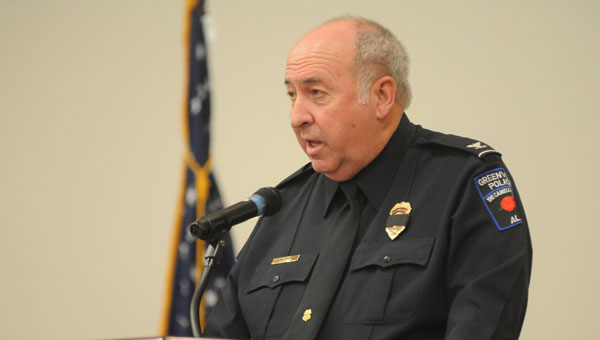 Law enforcement officers from across Butler County paused Wednesday to remember their own at a memorial service held at the Wendell Mitchell Conference Center on the campus of LBW Community College.

“This is a special day for us,” Greenville Police Chief Lonzo Ingram said. “We’re here to remember these officers that have gone on before us.”

Greenville Police officers Gary Wayne Heath, George Bryan and Joe Herring, along with Butler County Sheriff’s Office deputies John T. Sanders, Sr. and William Henry Barganier were recognized at the ceremony for giving their lives in the line of duty.

Sanders and Barganier were among those added this week to the National Law Enforcement Memorial Wall in Washington D.C.

“For a long time we didn’t know that we had a deputy that lost his life in the line of duty,” Butler County Sheriff Kenny Harden said. “We’re honored to be able to recognize them today.”

Sanders and Barganier, along with Bryan, will also have their names added to the monument at Greenville’s City Hall, according to Ingram.

Ingram said that it’s important that the police department, the Sheriff’s Office and the city pause each year to remember their fallen officers.

“We need to take the time to call these names every year so that we never forget these officers and the sacrifice they made in serving our community,” Ingram said. “This day is about them.”

Along with recognizing the officers that “made the ultimate sacrifice,” the service also provided an opportunity to recognize the service of the department’s current officers.

Lt. Kenneth Parker was recognized as the department’s Officer of the Year, an award that is sponsored each year by CorStone.

In December, Parker located Charles Gregory hiding near Clayton Homes following the armed robbery of Dollar General. Gregory was still in possession of the handgun when he was apprehended by Parker.

Just more than a week later, Parker, along with his K-9 partner, Dalton, seized approximately $17,000 worth of marijuana following a traffic stop. Along with the drugs, Parker also recovered a 9mm handgun and $520 in cash.

“Sometimes you just have to be in the right place at the right time,” Ingram said. “That’s the largest drug bust in our department’s history. We thought about giving the award to the dog since he found the drugs, but decided to go ahead and give it to Parker,” Ingram joked.

Parker, who has served on the Greenville Police force since 1996, said he was honored to receive the award.

“I’m at a loss for words, to be honest,” he said. “It’s just an honor to be able to serve our community and do what I can to keep our streets safe.”

Cpl. Tommy Anderson received the Gary Wayne Heath Education Award, which is presented to an officer that is pursuing higher education or additional training. That award is sponsored by Camellia Communications.

The keynote speaker for the event was James Spann, chief meteorologist for ABC 33/40 in Birmingham. Spann, also a regular contributor on The Rick & Bubba Show, grew up in Greenville and attended W.O. Parmer Elementary School through the fourth grade before his family moved to Tuscaloosa.

He said that each officer and deputy that serves in Butler County is a hero.

“(Law enforcement officers) have the chance to impact the people of this city and county in a way that no one else can,” he said. “Each and everyone of you is a hero. No matter what anyone else says, that’s the truth. Every man and woman in this room wearing a uniform is a hero. You are all my heroes.”