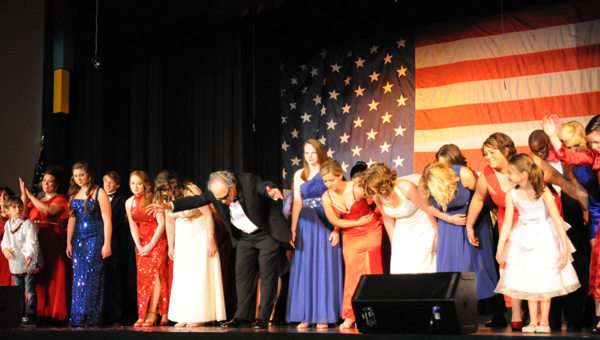 The cast of the seventh annual Putting on the Ritz peformances takes a bow. (Advocate Staff/Andy Brown)

Seats were scarce in the historic Ritz Theatre Thursday night.

A near-capacity crowd crammed into the historic theatre for the opening night of the seventh-annual performance of “Putting on the Ritz,” a fundraiser for the Greenville Area Arts Council that helps generate the necessary funding to bring professional stage shows to the Camellia City.

But on Thursday, the stage and the spotlight belonged to local talent.

“Those professional shows are fun, but I think our Ritz Players are the best,” GAAC Executive Director Nancy Idland told the crowd before the curtain was raised Thursday.

Nearly 50 Ritz Players took part in the performance, which featured songs from musicians with ties to Alabama.

The show ended with a tribute to the United States and its military as the cast, decked out in red, white and blue, performed patriotic numbers in front a giant American flag.

The final two performance of the three-night run are tonight and Saturday night. Doors open at 7 with the show set to begin at 7:30 both nights.