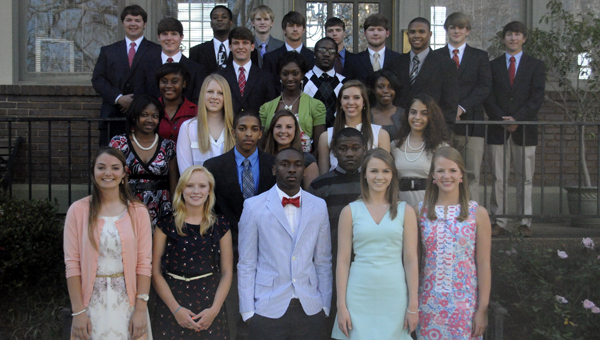 Twenty-seven of Butler County’s top student-athletes are vying for the honor of being named the recipient of the 16th annual Butler County Achiever Award.

The Achiever Award recognizes top student-athletes from area schools who not only excel in the classroom and on the playing field, but are also involved in church and the community.

“We’re really looking forward to having the chance to recognize these outstanding young people,” said Francine Wasden, a member of the Achiever Award board of directors. “They are certainly all worthy of being named achievers.”

Student-athletes from Fort Dale Academy, Georgiana School, Greenville High School and McKenzie School will be recognized, and two students – a male and a female – will walk away with a $1,500 scholarship.

The keynote speaker for this year’s awards banquet will be Dr. John Ed Mathison.

Mathison served as the senior minister of Frazer Memorial United Methodist Church in Montgomery for 36 years before retiring in June of 2008.

Under his leadership, Frazer grew from 400 members to more than 8,800 and had the largest Sunday School attendance for United Methodist churches in America. In 1986 the Church Leadership Institute sited Frazer as the fastest growing church of any denomination in Alabama. In 1999, the church was given the National Church of the Year Award from Neighbors Who Care, the victim assistance arm of Prison Fellowship, founded by Chuck Colson. Most recently, in 2006, The Church Reporter magazine recognized Frazer as the 25th most influential church in America.

Mathison was also a standout athlete as well as a scholar.

He was an all-state basketball player for three years in high school and was captain and leading scorer for Huntingdon College.

He was consistently ranked number one in his age division in tennis in Alabama and has been ranked No. 3 in the south. He has won seven state racquetball championships.