Brantley boys fall to St. Jude by a point 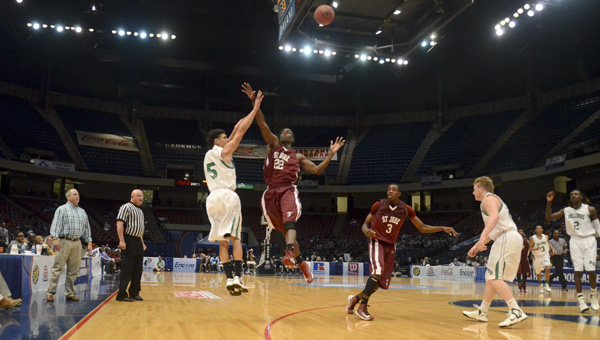 O.J. Guice shoots a three-pointer against St. Jude in the state championship game.

Trailing St. Jude 57 to 56 with 14.8 seconds left, the Brantley boys had a shot to win a state title, but a jumper from Wesley Person rimmed out and there was no time left for a putback.

“We wanted the ball in our hands at the last,” Kilcrease said. “We had what we wanted…  Wesley attacked the basket and shot it. We were hoping for a foul, but didn’t get one.  Terence [Bogen] had a good rebound and just didn’t get back up in time.”

The Bulldogs didn’t back down from St. Jude in the first half, matching them with 11 points in the first quarter and taking a 28-23 lead at halftime. 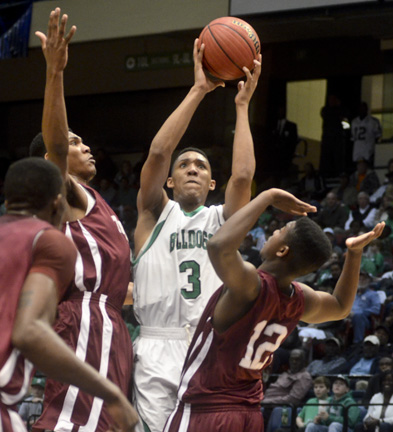 Kilcrease said he knew that the Pirates would be trying to feed the ball to Andrew Rogers inside, but that Brantley was trying to make them shoot the outside shot.

“They had a great shooting night on Tuesday night, and it’s hard to do that two nights in a row,” Kilcrease said. “They missed a few shots early, but they hit some in the fourth quarter that hurt us.”

The Pirates outscored Brantley 21-14 in the third quarter, but Brantley fought back to trail by two points going into the final period and neither team led by more than three for the last six minutes of the game.

Person led the Bulldogs in scoring with 22 points, and O.J. Guice had 17 points, going 4-7 from three-point range.

The trip to Birmingham and the Final Four was Brantley’s first since 1995.

The Bulldogs end the year with a 21-6 record. 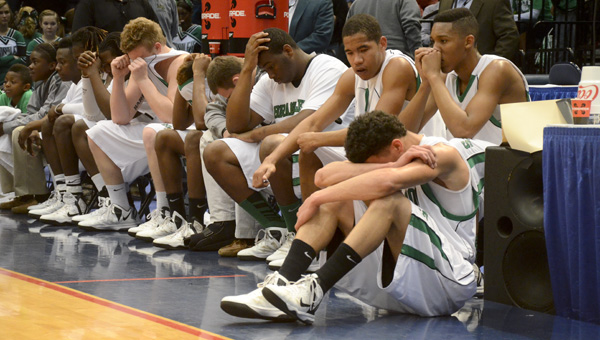 The Brantley boys sit quietly on the bench after the loss, waiting on the trophy presentation.